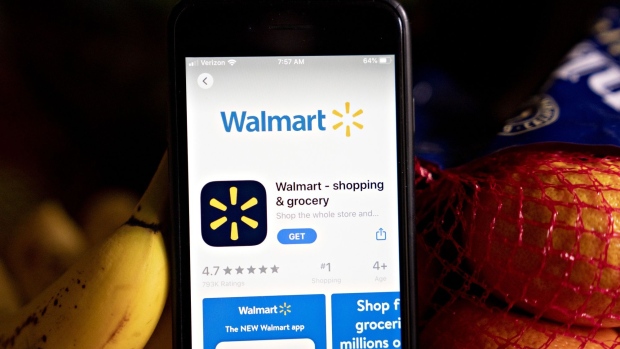 The Walmart application is displayed in the App Store on a smartphone in an arranged photograph taken in Arlington, Virginia, U.S., on Tuesday, May 19, 2020. Walmart Inc. posted strong quarterly sales fueled by coronavirus-related stockpiling, showing how it's one of the few retailers thats thriving even amid the unprecedented carnage in the U.S. retail sector. Photographer: Andrew Harrer/Bloomberg , Bloomberg

Walmart Inc.’s jump into the bidding for TikTok jolted investors and technology experts alike. What comes next could be even more disruptive, with the big-box American retailer taking a page from the playbook of TikTok’s Chinese counterpart.

At first glance, a brick-and-mortar giant whose core shoppers grew up with rotary phones and three television channels isn’t the likeliest candidate to own an internet app that’s wildly popular with Generation Z. But a closer look at the retailer’s digital ambitions shows the move is part of a broader long-term play to bring more shoppers, advertisers and vendors into the fold as the lines between content and commerce continue to blur.

If successful, Walmart’s bid alongside partner Microsoft Corp. could also enhance its soon-to-launch delivery subscription service, making it a more credible threat to rival Amazon.com Inc.’s Prime offering. TikTok could even become a platform to sell Walmart’s products, catapulting the 58-year-old Arkansas retailer into the emerging realm of “social commerce” against Facebook and its Instagram platform.

For Walmart, “this will be like a rocket in their pocket,” said Deborah Weinswig, founder and CEO of Coresight Research. “It’s a way to offer customers a hyper-personalized experience in both content and commerce.”

TikTok offers Walmart a road map through its Chinese cousin, Douyin. TikTok, as Americans know it, doesn’t exist in China. But both apps are owned by ByteDance Ltd., an innovative startup that has mastered blending social media with e-commerce. On Douyin, influencers use live streamed videos to hawk wares from lipstick to smartphones in real-time to hundreds of millions of users, funneling followers to shopping websites or -- increasingly -- ByteDance’s own online mall. That model has taken off on a scale unseen elsewhere in the world -- a template Walmart can explore in its fight against its U.S. arch-rival.

Walmart confirmed Thursday that it’s pursuing TikTok’s U.S. operations in a partnership with Microsoft, but in a brief statement the company offered few details about the bid or the nature of its involvement. That didn’t stop investors from getting excited, sending Walmart’s shares up 4.5 per cent, the biggest gain in seven weeks.

A deal for TikTok would help Walmart Chief Executive Officer Doug McMillon move the company well beyond its brick-and-mortar roots, something he’s been keen to do since taking the helm in 2014. It would buoy Walmart’s third-party marketplace and advertising businesses, which both deliver fatter profit margins than selling Coke and Cheerios.

“A Walmart-led acquisition of TikTok may open the door to China-inspired commerce models, with a twist,” said Michael Norris, a Shanghai-based analyst with marketing and research firm AgencyChina. “There’s a Walmart within 10 miles of 90 per cent of America’s population, which could open the door to a ‘buy online, pick up in store’ model.”

TikTok would give Walmart access to a large, young and loyal group of users coveted by advertising agencies and their blue-chip clients, who might shift some of their marketing budgets from Google, Facebook and Amazon over to Walmart’s in-house media arm.

Data gleaned from TikTok’s users -- who currently don’t shop at Walmart often, or at all -- could also influence the types of products that Walmart chooses to carry on its marketplace site, where Walmart doesn’t own the inventory but generates a fee from every sale. TikTok’s digitally native viewers are just moving into their prime consumption years now, making it an ideal time to rope them in.

“A social platform like TikTok would give Walmart easy access to the very audience it wants and needs to attract,” said Neil Saunders, an analyst at GlobalData Retail. “Having a serious stake in the world of social media would not only allow Walmart to bolster its marketing efforts, it would also give it access to a rich seam of data that would help it target shoppers more effectively.”

A tie-up would allow Walmart to tap into purchases made via social media, according to RBC Capital Markets analyst Mark Mahaney. One-quarter of U.S. Instagram users reported making a purchase on the site this year, RBC found, up from 15 per cent a year ago. There isn’t much direct commerce done over TikTok in the U.S. now, but that could change under Walmart’s stewardship.

“Combining social engagement with commerce is the magic formula for the future of retail,” says Jordan Berke, who helped lead Walmart’s Chinese digital operations before departing last year to start Tomorrow Retail Consulting. “Facebook is in the pole position to be America’s super app, but this places Walmart plus Microsoft as a solid No. 2.”

Amazon still has a leg up due to its detailed shopping histories for nearly half a billion people, who already do most of their internet shopping there, RBC’s Mahaney says.

About 265 million people shop at a Walmart store or on its website each week, but Walmart knows less about them. That’s why it’s about to launch a new subscription service dubbed Walmart+, which could narrow that gap.

Live streamed commerce across China tripled to 451 billion yuan in 2019 (US$66 billion), about 4.5 per cent of total online retail according to iResearch. That’s why Douyin is accelerating its transformation from an ad platform to one that also handles purchases. Douyin now invites reputable creators to set up in-app shops that feature prominently on their bio pages. It’s not just small merchants either. Chinese retailer Suning.com, a Best Buy equivalent, is the most recent to join.

Financing the deal likely won’t be difficult for the world’s biggest retailer, given its hefty cash balances and access to debt. The real challenge lies in just how different social media is from Walmart’s prior digital acquisitions, like Jet.com or Indian e-commerce site Flipkart.

“They’re not a social media player or a real technology company. That’s probably the biggest risk,” said Rupesh Parikh, managing director at Oppenheimer & Co. “We don’t have really much of a strategic rationale at this point.”

For McMillon, the rationale is remaining relevant at a tumultuous time for traditional retailers. The CEO keeps a list of the biggest retailers over the years close at hand, reminding him to constantly adapt or meet the fate of failed chains like Kmart and Woolworths. Bringing TikTok into the fold could help him do just that.

--With assistance from Nic Querolo.