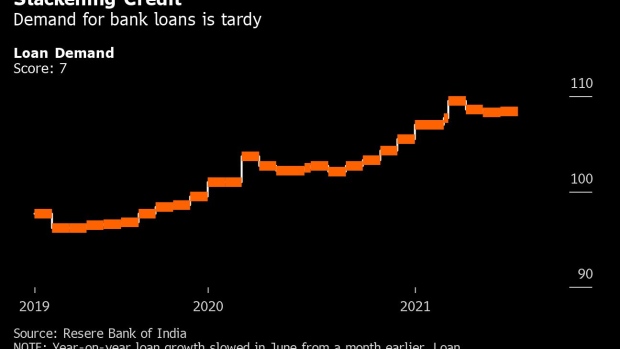 India’s economy held steady in July as waning Covid-19 cases paved the way for a gradual improvement in manufacturing and services activity.

All eight high-frequency indicators tracked by Bloomberg News remained unchanged last month, based on the three-month weighted average scores to smoothen out volatility in the single-month readings. That kept the needle on a dial measuring the so-called animal spirits steady at 5 -- the same speed as June.

Relaxation in restrictions and a lower-than-expected hit to the economy from the second wave of the pandemic is fueling hopes of a faster recovery in coming months. Data due Aug. 31. will likely show gross domestic product expanded 21% in the April to June quarter from a year ago. That is thanks mainly to a favorable base effect, with activity last year coming to a halt owing to a nationwide lockdown to control the virus’s spread.

Here are the details of the dashboard for July:

Factory managers in India saw a surge in activity in July, reflecting a pick up in orders as pandemic curbs were lifted. A similar survey of services’ purchasing managers showed improvement, although the reading remained below the 50 level that divides contraction and expansion. That kept the composite index in shrinkage territory during the month.

Exports rose 49.8% year-on-year in July. While that was way slower than the 196% increase seen in April, the ebbing gains largely reflect the base effect wearing off. Two positive takeaways are the return of demand for petroleum products, with shipments jumping 231%, and gems and jewelry exports growing 131%.

Retail auto sales, a bellwether of consumer demand, posted robust sales despite a steep rise in commodity prices and supply disruptions, according to Rajesh Menon, director general of the Society of Indian Automobile Manufacturers. Motorcycle and two-wheeler sales, an indicator of animal spirits in smaller towns, were little changed last month.

Industrial production expanded 13.6% in June from a year earlier, slowing for a second straight month after a record 135% growth in April. Easing gains are again attributable to the base effect wearing out.

Similarly, output at infrastructure industries, which makes up 40% of the industrial production index, expanded 8.9% in June, slowing from year-on-year growth of 16.3% in May and 61% in April. Both data are published with a one-month lag.