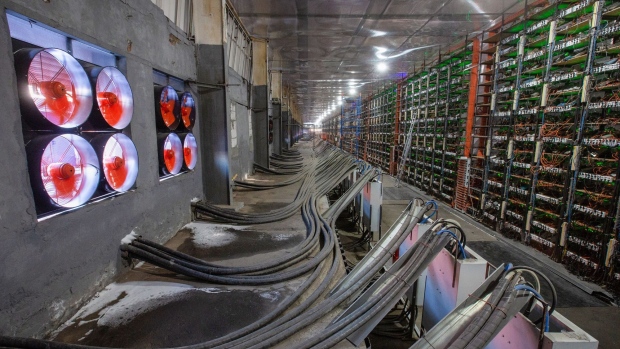 Industrial cooling fans operate to thermally regulate the CryptoUniverse cryptocurrency mining farm in Nadvoitsy, Russia, on Thursday, March 18, 2021. The rise of Bitcoin and other cryptocurrencies has prompted the greatest push yet among central banks to develop their own digital currencies. , Bloomberg

(Bloomberg) -- The endless competition among Bitcoin miners to assemble the fastest computers has led to a surprising new tactic: installing computers inside tanks of liquid coolant.

The immersed equipment runs faster without overheating. In a business where every nanosecond of advantage counts, every major miner is piloting the technology right now, according to Nishant Sharma, founder of mining consultant BlocksBridge.

“It looks like a fish tank with machines inside it,” Sharma said in an interview Tuesday. “Sooner or later, all big miners will be doing large-scale immersion mining.”

The trend illustrates the lengths crypto-mining companies will go to gain advantage over their competitors. Their fortunes rise and fall on being the first to solve complex calculations that underpin the Bitcoin system, spurring a virtual arms race for the fastest machines.

Last month Riot Blockchain Inc., a Nasdaq-listed mining company, said it was developing the first large-scale immersion-cooled Bitcoin mine at its facility in Texas. The company said it will place 46,000 mining machines requiring 200 megawatts of electricity into cooling liquid. Royal Dutch Shell Plc also introduced a new immersion cooling fluid in August that can be used in crypto mining.

Bitcoin mining operations are made up of thousands of computers stacked on shelves in warehouses surrounded by huge fans. Electricity can account for about 80% of a miner’s operating cost, according to Tyler Page, the chief executive officer of Cipher Mining Technologies Inc.

The crypto industry has been criticized for the amount of electricity its mining operations suck up. While immersion won’t make the rigs use less power, they’ll likely be more profitable if they can run faster.

The push towards immersion-cooled mining has driven an increase in demand for the synthetic coolant that bathes mining rigs.

“We’re at the limit of our ability to cool electronics with air,” David Sundin, the co-founder and chief scientist at Texas company Engineered Fluids, said in an interview Tuesday. “Our business has increased 500% in the last six or seven months. It’s just gone through the roof.”