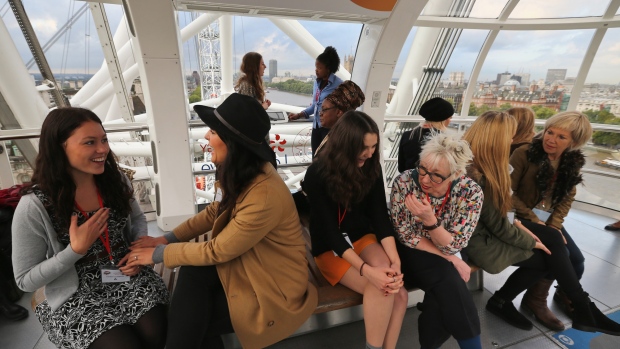 LONDON, ENGLAND - OCTOBER 11: Inspirational women from various walks of life take part in a mentoring session in a London Eye pod with 6th form girls from Gumley House Convent School in Isleworth on October 11, 2013 in London, England. The session was part of a global event to mark the UN International day of the Girl. (Photo by Dan Kitwood/Getty Images) , Photographer: Dan Kitwood/Getty Images Europe

(Bloomberg Opinion) -- In 1989, feminist Arlie Russell Hochschild argued that working women go home to work a “second shift,” performing the majority of the labor involved in caring for their homes and children. That’s not the only extra shift working women are doing. Some are also being asked to do a second, unpaid shift at work, where they’re putting in extra time to help boost the careers of other women. This kind of labor — such as mentoring or serving on committees designed to improve corporate policies toward women — is essential to helping women advance, which ultimately redounds to the benefit of their employers. So it should come with compensation.

One way senior-level women are needed to boost the careers of junior-level women is by serving as mentors. Women in C-suites were more likely to have had a mentor at any stage in their careers, a 2017 survey by consulting firm Egon Zehnder found, suggesting that it’s critical to attaining leadership positions. Although studies of the role gender plays in mentoring relationships have yielded mixed results, there is evidence that women do better when their mentors are other women, because they can see them as role models. But because women hold just 24 percent of senior positions globally, according to the nonprofit Catalyst, each one essentially must mentor more than one woman in order for women and men to ultimately achieve parity in leadership positions.

This puts a significant burden on the women who are being called upon to do all of this unpaid mentoring. As Bloomberg Technology anchor Emily Chang reported in her 2018 book “Brotopia: Breaking Up the Boys’ Club of Silicon Valley,” when Sequoia, an elite Silicon Valley venture capital firm, launched a mentorship program for women, one woman who was asked to join the program as a mentor “said she felt as if Sequoia was asking her to do free work, while the firm took all the credit."

Women are also often called upon to contribute to the advancement of other women by helping set policy and recruit for their organizations. Like Sequoia’s mentorship program, such initiatives are often implemented by companies seeking to improve their reputations after they’ve faced criticism for their treatment of women or lack of gender diversity. For example, in her recently published book “Merchants of Truth: The Business of News and the Fight for Facts,” Jill Abramson noted that after allegations surfaced of a “sexist culture and toleration of harassment” at Vice Media, the company “predictably appointed a group of female elders to study the culture and recommend changes.” Similarly, Chang noted that Google — which has also been criticized for its lack of gender diversity — instituted a policy that all candidates for technical jobs must be interviewed by a woman. “Some women felt that participating in so many interviews hurt their performance overall,” Chang wrote. “The more time they spent doing interviews, the less time they spent writing code, which is what reviews and raises were based on.”

Clearly, senior-level women need to do a significant amount of work in their organizations in order for other women to succeed there, too. But they shouldn’t be required to do it without compensation. Such efforts don’t just benefit female employees; they often help organizations repair or bolster their images. And companies that increase their gender diversity improve their financial performance, a 2016 study by the International Monetary Fund found.

Women’s work to advance other women should be recognized by their employers, and there are lots of ways this could work. Such responsibilities could be part of their formal job descriptions. Alternately, women who are asked to participate in special projects could receive extra compensation, extra vacation time, or help from other staffers on unrelated assignments. But doing this second-shift labor for free only creates one more burden on women that, ironically, makes it harder for them to advance in their careers.

To contact the author of this story: Kara Alaimo at kara.s.alaimo@hofstra.edu

Kara Alaimo is an assistant professor of public relations at Hofstra University and author of “Pitch, Tweet, or Engage on the Street: How to Practice Global Public Relations and Strategic Communication.” She previously served in the Obama administration.