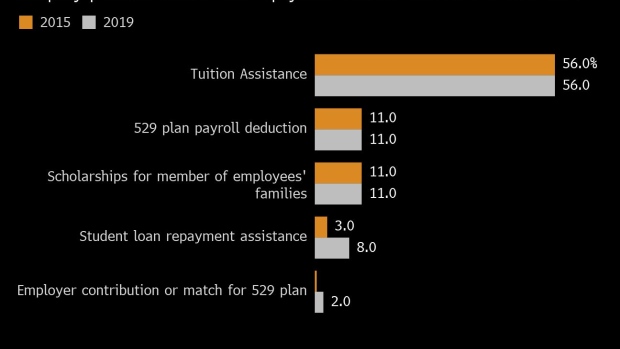 (Bloomberg) -- Like millions of her peers, Nicole Read graduated with thousands of dollars of debt. Unlike most of them, she’s getting direct help from her employer to pay it back.

The 26-year-old’s job at event organizer Live Nation Entertainment in Beverly Hills, California, comes with a benefit that may be starting to catch on at U.S. companies: Contributions to her student loan bills. Offering such an incentive helps businesses lure prospective employees as they grapple with tight labor market conditions marked by a jobless rate near its lowest in almost five decades.

In Read’s case, it’s $100 a month. As a result, “I’m paying like $30 over my minimum payment every month, so it’s gotten me to pay off my interest a little quicker,” she said. “It just kind of gives me a bit of breathing room.”

Such plans are spreading. They were on offer to staff at about 8% of U.S. employers in 2019, more than double the 2015 level, according to an April survey by the Society for Human Resource Management.

Another study by business adviser Willis Towers Watson found that 32% of firms are considering introducing a similar benefit by 2021.

“If you have a young demographic, offering benefits like student loan repayment could be the way to go,” said Alex Alonso, chief knowledge officer for SHRM.

Pronounced competition for talent and the elevated debt burden for a generation of Americans making their way into the workforce are driving the change. Millennials make up more than half of Live Nation’s U.S. labor force.

The balance on outstanding student loans reached $1.6 trillion at the end of the first quarter, and more than a quarter of that is held by people younger than 30. The effects reverberate through their social and economic lives, making it harder to start a family, buy a home or purchase big-ticket items, research shows.

The federal government is considering giving companies a break for helping employees with their debt.

The Employer Participation in Repayment Act, introduced in the House and Senate in February, would provide tax relief to firms that do so. It has bipartisan sponsors, including Democratic presidential candidates Seth Moulton and Amy Klobuchar.

Other Democratic contenders, like Senators Bernie Sanders and Elizabeth Warren, have proposed more sweeping fixes that include writing off loans.

“Helping employees get out of debt faster is a win-win, both for the employee and for our productivity,” said Katie Wandtke, director of human resources at Cybrary, a cyber-security firm based in College Park, Maryland.

It’s not just smaller shops adopting the benefit. Larger companies, including professional services powerhouse PricewaterhouseCoopers, are catching on too.

Live Nation began offering the benefit in early 2017 and has helped employees save over $4 million. More than 80 of the company’s workers have been able to completely pay off their loans, according to Live Nation.

The event organizer works with startup Tuition.io, which specializes in helping companies set up such programs and has clients including Fidelity Investments and Staples. There are other platforms in the market too, including Goodly, which works with Cybrary, and Gradifi, used by PwC since 2016.

Paying an extra $30 a month more than the minimum, like Read says she does with her employer’s help, makes a difference.

“Jobs in the entertainment industry like this one, they’re not high-paying jobs necessarily,” said Read. “So this kind of helps offset that wage difference and it’s really helpful for people like me.”

To contact the reporters on this story: Alex Tanzi in Washington at atanzi@bloomberg.net;Shelly Hagan in New York at shagan9@bloomberg.net

To contact the editors responsible for this story: Alex Tanzi at atanzi@bloomberg.net, Ben Holland, Vince Golle