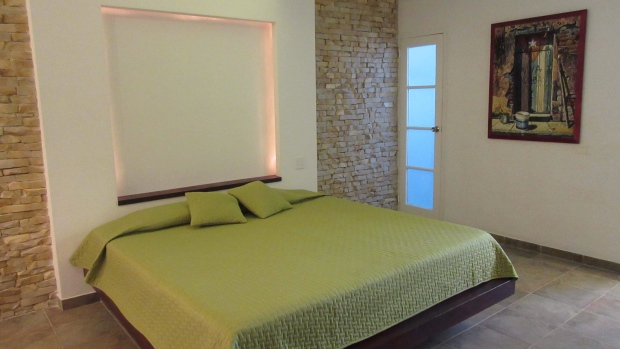 the interior of a newly renovated Airbnb listing, by owner Majel Reyes, in Old Havana , The Canadian Press

TORONTO -- Dara Choubak and June Cormack wanted a little help with the mortgage payments on their five bedroom home in Nelson, B.C.

But rather than take on a full-time roommate, the couple opted to list their guest bedroom on the short-term rental site Airbnb.

"It's nice to be able to have a little bit of an extra income to help us with the mortgage, but not have to commit to having somebody in our space for a long period of time," says Cormack.

Aaron Zifkin, Airbnb's Country Manager for Canada, says the site is popular among tech-savvy millennials looking for extra cash to pay for school.

Recently, it's also seen huge growth in the 55-and-over demographic, particularly among retirees looking to supplement their fixed incomes, he adds.

"It's a great way for people to monetize their most valuable asset, which tends to be their home," Zifkin says.

Experts say there are a number of things that potential hosts should consider from a financial perspective before listing their homes on the vacation rental site.

Be mindful of the costs associated with being a host, which can include everything from toiletries to cleaning fees to additional furniture.

When Choubak and Cormack decided to list their home, they paid a small fee to obtain a business license from the City of Nelson.

They also had to buy two extra fire extinguishers to make sure their home was up to fire code.

Talk to your insurance company

While the vast majority of Airbnb rentals are incident-free, there is always some risk involved when you allow strangers into your home.

Airbnb's host guarantee reimburses hosts for damages of up to $1 million, but the company's website says the guarantee shouldn't be treated as a stand-in for renters or homeowners insurance.

That's because some things -- such as damage to common or shared areas -- are not covered.

"We encourage everybody to check with their insurance providers," Zifkin says.

There may be tax implications

Any money generated through rentals must be reported as income to Canada Revenue Agency says Caroline Battista, a senior tax analyst at H&R Block.

"If you're making money through a sharing app, you pay tax on that income," she says.

"But much like other rental incomes, you do have the right to claim expenses against it. So it's really about tracking your income and tracking your expenses so that you know what to claim."

Airbnb hosts who earn over $30,000 a year will also have to collect either HST or GST, depending on which province they live in, on the government's behalf, Battista says.

Consider automation to lighten the workload

There are a number of property management companies that can run your Airbnb listing for you if you're tight on time says Glenn Carter, founder of Canadian sharing economy blog The Casual Capitalist.

Although these companies will take a cut of the profits, in some cases hosts could end up earning more money overall, Carter says.

Property managers that specialize in Airbnb hosting typically use what's called dynamic pricing to ensure that your home is priced appropriately to maximize your profits, he says.

"It frees up your time to do other things, and these companies know the market really well," says Carter.

"I've heard some people say that even after the fee they pay to the property manager, that they increased their profits ... but that's on a case-by-case basis."