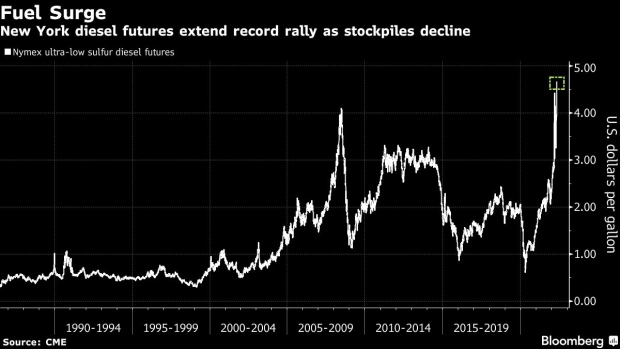 A combine harvester harvests a field of wheat during a harvest by Agrotrade Group in Chernihiv, Ukraine, on Thursday, Aug. 10, 2017. Ukraine’s wheat harvest reached 19.1m tons as of Aug. 1, local Agriculture Ministry said in an emailed statement. , Bloomberg

(Bloomberg) -- It’s an awkward but unavoidable truth: War in Ukraine is proving quite good for business for the world’s top commodities traders.

Glencore Plc expects its full-year trading profits will again exceed its targeted range following a bumper first-quarter performance, while crop giant Bunge Ltd. boosted its earnings estimates for the year by more than 20% after reporting its own stellar results.

Since Russia’s February invasion of Ukraine, commodity markets have been thrown into disarray. That has boosted prices and cut off supply, creating a harrowing environment for consumers of raw materials but the perfect conditions for trading houses. Commodities traders, who transport the world’s resources, have been able to profit from the volatility, arbitraging cargoes through the web of sanctions and supply disruptions to keep material flowing.

“What we’ve always found is that in times of high volatility, high prices and high volume is when we have the opportunity to make the most money,” Bunge chief financial officer John Neppl said on a conference call following the release of the company’s booming first-quarter results.

To be sure, that activity doesn’t come without risks. The surge in volatility has put the balance sheets of commodity traders under huge strain, with massive daily price moves triggering billions of dollars in margin calls across the industry.

Together, Russia and Ukraine are some of world’s top exporters of wheat, corn and sunflower oil. Disruptions of plantings in Ukraine and the challenges of paying for Russian grains have helped boost prices to multi-year highs.

Before the war, Ukrainian ports along the Black Sea were gateways for much of the region’s grains to be loaded onto ships bound for Asia, North Africa and the Middle East. Now they’ve become part of the war, blockaded and shelled.

As importing countries like Egypt, Algeria and China scramble for food products, those traders with positions outside the Black Sea such as Viterra and the so-called ABCD group of major crop merchants -- Archer-Daniels-Midland Co., Bunge, Cargill Inc. and Louis Dreyfus -- have been able to offer buyers grains from alternate sources like France, the U.S. and Brazil.

As prices for crude oil have remained elevated, that’s taken cooking products such as palm oil and soybean oil higher, benefiting crush margins for the traders.

ADM has not yet raised its earnings estimate for the year, although some analysts already have. It did say this week it anticipates 2022 results will exceed those of last year, without going into specifics.

Combined with a shortage of crops in South America, disruptions in the war-torn region will “drive continued tightness in global grain markets for the next few years,” ADM CEO Juan Luciano said in a conference call on Tuesday.

In the world of energy, independent traders such as Vitol Holding BV, Trafigura Group, Gunvor Group Ltd. and Mercuria Energy Group Ltd. are all closely held and do not release quarterly results.

Still, signs point to strong performance. For instance, shortages of diesel that have recently sent prices around the world surging were well flagged by some of the group.

Some of the biggest trading units are nestled within the wider business of energy majors, meaning more disclosure of performance. TotalEnergies SE saw first-quarter profits rise threefold as prices for oil and refining margins surged, while rival Shell Plc has flagged that results for its gas-trading segment “are expected to be higher” than in the fourth quarter.

“The rebound in energy prices seen since the second half of 2021 amplified after Russia’s military aggression against Ukraine,” TotalEnergies’ CEO Patrick Pouyanne said in a statement on Thursday, adding on a later earnings call that margins could further improve.

Meanwhile, Glencore, the world’s biggest commodities trader, said Thursday that its marketing division will record profits “comfortably” above the top end of its $2.2 billion to $3.2 billion guidance range this year.

The company is active in energy and also agricultural products through its stake in Viterra. But it’s metals trading where it really dominates, holding positions anchored by an array of mining and smelting assets.