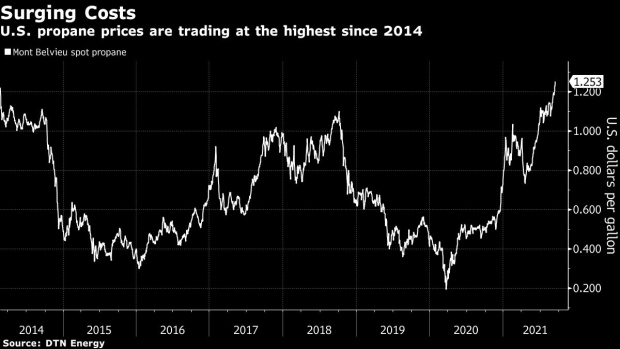 (Bloomberg) -- Americans who rely on propane for heating are facing the most expensive winter in years as prices for the fuel jump to the highest since 2014.

Propane prices have risen almost 60% so far this year in Mont Belvieu, Texas, the main U.S. trading hub, amid strong overseas demand and tighter production. A rally in natural gas is adding momentum, since about 80% of America’s propane is a byproduct of gas processing.

The propane surge comes amid skyrocketing costs for raw materials, adding to inflation concerns. About 5% of U.S. households use propane as their primary heating fuel, and farmers rely on it to dry corn crops. It’s also used as an ingredient in plastics production, intensifying price pressure for consumer goods.

Propane suppliers usually build up stockpiles going into winter, but higher exports this year and rising demand from petrochemical producers are making it harder to replenish inventories. Oil refineries, which typically supply the other 20% of U.S. propane, curbed operations after Hurricane Ida tore through Louisiana in late August.

Propane inventories sit at 70.8 million barrels, about 20% below the five-year average for this time of year, according to the latest data from the Energy Information Administration. At the same time, the county’s shipments to overseas buyers have continued to increase over the last two years as exporters expand terminals and ink contracts with customers in Asia.