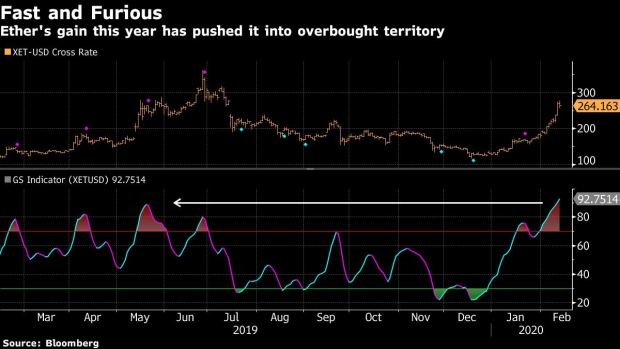 (Bloomberg) -- Ether has more than doubled this year, but technical indicators are starting to flash worrying signals for the second-biggest cryptocurrency.

Based on the GTI Global Strength Indicator, which measures upward and downward movements of successive closing prices, the coin is at its most overbought level since May 2019. An asset is considered overbought if the indicator exceeds 70 and oversold if it’s below 30 -- Ether touched as high as 92.7 this week.

In addition, Ether’s triple-digit percentage gain this year has pushed the Bloomberg Galaxy Crypto Index, which tracks some of the largest digital assets, into overbought territory. Ether makes up close to 30% of the index.

“It is eye-opening the little run it has put together,” said Edward Moya, a senior market analyst at Oanda Corp. in New York. Its rally could continue, he said, but added that “if bullish momentum gets out of control, Ether will likely find strong resistance in the $400-$440 region, roughly the midpoint of the record high seen in 2018.”

Cryptocurrencies are undergoing a renaissance this year, with tokens large and small posting massive gains. Bitcoin is up about 40%, while some alternative tokens -- including Einsteinium and Kick -- have more than doubled.

Some investors argue that cryptocurrencies tend to benefit when sudden events -- such as the spreading coronavirus -- shake up global markets. During times of upheaval, they say, digital tokens may act as haven assets. But this year’s rally coincides with record-highs for U.S. stocks, leaving investors to analyze technical trends.

Amid Ether’s resurgence, a number of firms, including Grayscale Investments, have in recent days touted its virtues, with the digital-asset manager and fund provider saying in a report it’s “generated significant technological and social momentum that will be difficult for competing platforms to replicate.”