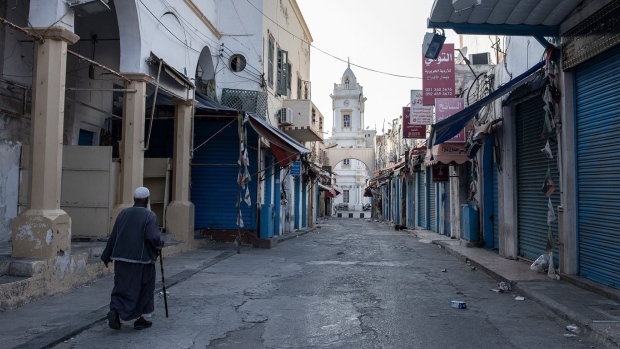 TRIPOLI, LIBYA - AUGUST 03: A man walks along a road in Al-musher market during a coronavirus lockdown on August 03, 2020 in Tripoli, Libya. Just weeks after the Tripoli Government (GNA) and the rival eastern government declared a ceasefire and three months after Turkish-backed, pro-government forces pushed General Khalifa Haftar's forces from Tripoli creating a lull in fighting, tensions in Tripoli are once again on the rise. Government infighting, foreign interference, a failing economy, rival armed factions, fresh protests and the governments struggle to contain the spread of coronavirus, have all contributed to fears of a fresh chapter of chaos and violence. Since the 2011 Arab spring uprising and the killing of dictator Moammar Gaddafi, Libya has descended into years of chaos with residents across the country plagued by water and food shortages, constant power outages and threats of violence, creating little chance to rebuild their lives after years of war and instability. (Photo by Nada Harib/Getty Images) Photographer: Nada Harib/Getty Images Europe , Photographer: Nada Harib/Getty Images Europe

(Bloomberg) -- Libyan rivals wound up a round of political talks after failing to reach agreement on who will lead a transitional government during the runup to planned elections.

A virtual meeting is to be held in about a week to continue discussions, the United Nations’ acting envoy said. A week of negotiations in Tunisia did yield agreement on a path to a vote that’s preliminarily scheduled for Dec. 24, 2021 and on the responsibilities of a revamped executive authority.

“Ten years of conflict cannot be resolved in one week,” envoy Stephanie Williams told reporters late Sunday in Tunis. “We still have a lot of work to do. The participants must soldier on.”

The Tunisia talks were part of a broader push to resolve conflict that has ravaged Libya for nearly a decade, battering its vital oil sector and displacing tens of thousands of people. Representatives of the internationally recognized Tripoli government headed by Prime Minister Fayez al-Sarraj and eastern military commander Khalifa Haftar are also conducting economic and military negotiations.

Outstanding differences include whether those who held positions in the country since 2014 would be allowed to serve in the transitional government. Libya’s current actors have been put on notice that things have to change, Williams said.

“The dinosaurs became extinct, and political dinosaurs risk the same -- frankly -- fate if they don’t prove themselves to be relevant,” Williams said.

Negotiators have agreed on the authorities of the executive branch and its separation from the government, which would be largely responsible for providing services, she said.

Previous efforts to bring peace to the country that is home to Africa’s largest crude reserves have foundered.

(Recasts and updates with details)