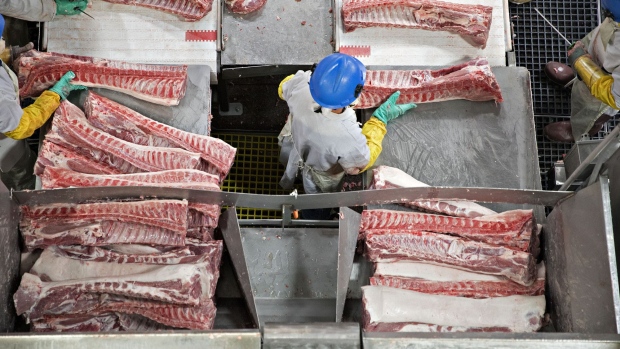 (Bloomberg) -- A speedier and more forceful response by U.S. officials could have prevented the large outbreaks of Covid-19 at meat plants that sickened thousands and killed dozens of workers, according to Senators Elizabeth Warren and Cory Booker.

The senators decried the “feckless” response by the Occupational Safety and Health Administration, which earlier this month fined Smithfield Foods Inc. $13,494 and JBS Foods $15,615 for failing to protect workers, respectively, at a South Dakota pork plant and a Colorado beef plant.

The fines were too small and too late to force the companies to implement social distancing and slower production that could have reduced transmission of the virus, the senators wrote in a letter seen by Bloomberg seeking information from OSHA on its meat-plant inspections.

“These workers did not have to get sick due to Smithfield’s and JBS’s disregard for workers’ health,” Warren and Booker wrote. “Your agency could have acted swiftly to require that these workplaces made changes.”

The American government is falling behind global rivals when it comes to protecting meatpacking workers from Covid-19 infections, even though the nation’s plants were among the first to confront rampant cases across factories. While countries like Germany and Australia have taken stronger actions, the U.S. has yet to impose any mandatory safety measures on meatpackers to contain infections, with OSHA issuing just voluntary guidelines.

Warren and Booker also said that “OSHA’s inaction disproportionately harms workers and communities of color.” A Centers for Disease Control and Prevention report in July showed that of the cases that disclosed race and ethnicity, 87% involved minority workers.

Smithfield has said OSHA’s fine on the company was “wholly without merit” and it planned to contest it. JBS said the government was seeking to “impose a standard that did not exist in March” when the meat producer fought the pandemic “with no guidance.”

More than 42,000 workers at 496 meat-packing plants have tested positive for the virus, and 203 have died, according to the Food and Environmental Reporting Network.