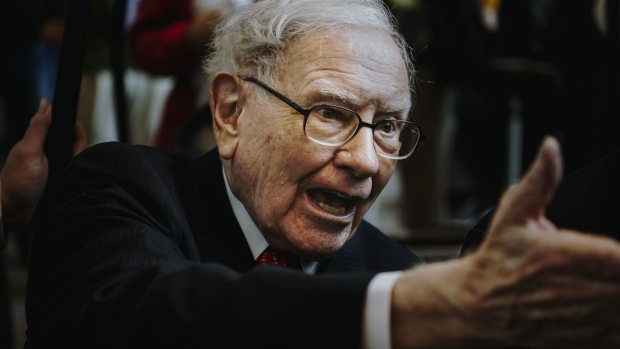 Warren Buffett, chairman and chief executive officer of Berkshire Hathaway Inc., speaks to members of the media during a shareholders shopping day ahead of the Berkshire Hathaway annual meeting in Omaha, Nebraska, U.S., on Friday, May 3, 2019. Buffett's Berkshire Hathaway agreed earlier this week to make the investment in Occidental to help the oil producer with its $38 billion bid for Anadarko Petroleum Corp. , Bloomberg

(Bloomberg) -- Warren Buffett is once again richer than Mark Zuckerberg, a reminder of the enduring power of his value-investing approach.

It’s also the result of this week’s precipitous decline in tech stocks, which has wiped about $50 billion in wealth from Silicon Valley’s richest people.

The net worth of Elon Musk, the world’s richest person, plummeted $25.8 billion on Thursday, the fourth-steepest one-day fall in the history of the Bloomberg Billionaires Index. He’s down $54 billion this year. Zuckerberg, co-founder of Meta Platforms Inc., has seen his fortune fall 12%, or $15 billion in 2022.

Buffett’s net worth has risen $2.4 billion this year to $111.3 billion. He now tops Zuckerberg by $1 billion, and is at his highest ranking on the Bloomberg index since last March.

Value stocks, the bedrock of Buffett’s investing philosophy and focus of his Berkshire Hathaway Inc., have outperformed tech firms and the S&P 500 Index since the start of the year, declining 4.2% compared with a 9.2% drop for the S&P and 15% for tech.

Buffett, 91, is the only person ranked among the world’s 10 richest whose net worth has grown year-to-date. Berkshire Hathaway’s A shares -- which make up 98% of his fortune -- have gained 2.3% since Jan. 1.

Buffett’s persistent presence among the top rungs of the billionaires index is particularly significant given the amount of money he’s donated over the years: almost $33 billion worth of Berkshire stock to the Bill & Melinda Gates Foundation since 2006. Only Gates himself, currently ranked No. 4 with a net worth of $127 billion, has made charitable gifts of that scale.

The world’s 500 richest people have lost a combined $635 billion since Jan. 1 as markets react to anticipated tightening measures from the Federal Reserve and inflation running at its highest level in four decades.