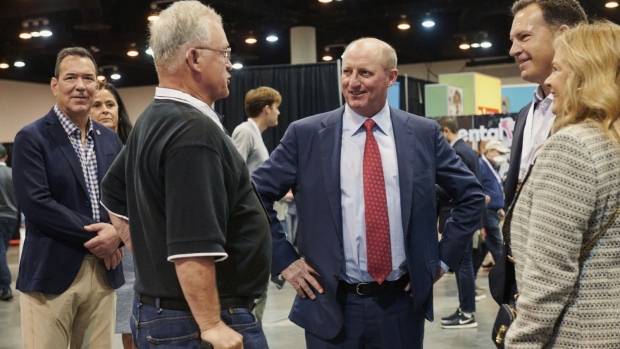 Greg Abel, chairman of Berkshire Hathaway Energy, center, during a shareholders shopping day ahead of the Berkshire Hathaway annual meeting in Omaha, Nebraska, U.S., on Friday, April 29, 2022. After hanging in the shadows for most of the pandemic, Warren Buffet and his deputies have been ramping up Berkshire Hathaway Inc.s acquisition machine -- snapping up shares of Occidental Petroleum Corp. and HP Inc. and striking an $11.6 billion deal to buy Alleghany Corp. , Bloomberg

In a quarterly filing released alongside Berkshire financial results was the disclosure that Vice Chairman Greg Abel’s common stock in Berkshire Hathaway Energy was purchased by the subsidiary for $870 million in June.

The transaction, which Omaha, Nebraska-based Berkshire hadn’t previously disclosed, is notable because it touches on a concern raised by shareholders: Abel, who oversees Berkshire’s non-insurance businesses, is set to become chief executive officer once Buffett is gone. But unlike the company’s long-time leader, he holds few shares of the parent company.

According to Berkshire’s most recent proxy statement, Abel owns five Class A shares in a trust and 2,363 Class B shares on behalf of family. None of the shares are owned beneficially. Meanwhile, Buffett’s stake in the business following a June donation consisted of 229,016 Class A shares, a little over 38% of shares outstanding at the end of that month, plus 276 Class B shares.

“Will Greg Abel as the future leader of Berkshire Hathaway be a buyer of the stock?” asked Cole Smead, president of investment firm Smead Capital Management, in an interview. “And if not, you still have a difference in interest.”

An attendee raised the concern during the company’s annual meeting in April, asking if there was any plan to convert Abel’s holdings in the energy subsidiary into Berkshire stock, and whether investors should be concerned about the “incentive structure” for the vice chair.

“I just don’t think it’s a big problem at all,” Charlie Munger, Buffett’s business partner, said in response to the question. “I see no behavior from Greg ever that isn’t in the best interests of Berkshire.”

The purchase of Abel’s stake in the energy business raises the questions of whether Abel will plow proceeds from the deal into shares of the parent company.

“I would like to see Greg Abel deploy a substantial percentage of the after-tax proceeds of his BHE sale into Berkshire Hathaway shares,” Jim Shanahan, an analyst at Edward Jones, said in an interview. “Given that he’s going to be the CEO of the company someday, I’d like to see him with substantial skin in the game.”

Berkshire Hathaway didn’t immediately respond to a request for comment.

Adding a further wrinkle to the transaction is the ownership structure of Berkshire Hathaway Energy. Berkshire Hathaway now owns a 92% stake in the business, the quarterly filing from Saturday shows. The estate of Walter Scott Jr., a former Berkshire board member who died last year, owns the rest of the business, representing a potential target for a buyout by Berkshire, which has the right to purchase the shares before they’re offered elsewhere.

“We’d rather have 100%,” Buffett said during the annual meeting, “because more earnings for Berkshire. But there’s no reason to try and do anything with either the Scott interests or Greg unless they want to do it. And the logical thing is, if anything happened with the Scotts, we’d certainly offer it to Greg. But who knows what happens in the future.”