Wells Fargo & Co. shares delivered a total return of 61 per cent last year, outpacing every other company listed in the most recent public snapshot of Berkshire Hathaway Inc.’s portfolio, as of Sept. 30, according to data compiled by Bloomberg. That trounced the performance of the conglomerate’s two biggest bets, Apple Inc. and Bank of America Corp.

Buffett’s Berkshire will give investors an updated look at its holdings in coming days. Already, its filings show that Wells Fargo’s rebound was largely a missed opportunity. For years, the San Francisco-based bank ranked as the biggest equity bet by market value in Berkshire’s stock portfolio, and was routinely praised by the billionaire himself. But as the bank struggled to resolve scandals, Berkshire slashed its investment to roughly 675,000 shares by September from 323 million shares at the end of 2019.

Wells Fargo’s stock took off last year amid signs that Charlie Scharf is making progress in his efforts to turn the lender around. The chief executive officer and his team cleared some key regulatory hurdles, and full-year profit soared more than 10-fold after falling dramatically in 2020. Though Wells Fargo also had what it termed “setbacks” with watchdogs, it was the third-best performer in the KBW Bank Index of 24 major U.S. lenders in 2021 after ranking worst a year earlier.

“For the first time in a long time, Wells started to deliver,” said Kyle Sanders, an Edward Jones analyst who’s been recommending buying the stock since 2018. “There’s a heightened sense of urgency to address regulatory issues, and they said they were going to cut costs and expenses -- and they did.” 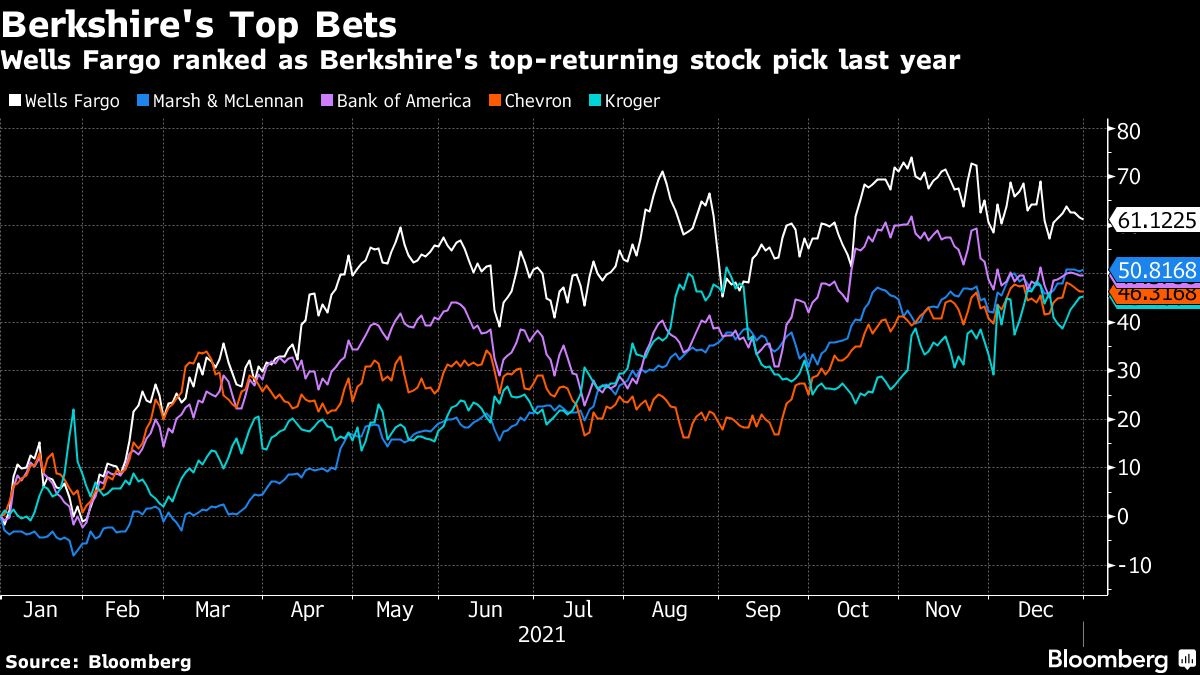 That progress came too slowly for Buffett. His pullback from the bank started in 2017, a year after the scandals began erupting, and then accelerated during the pandemic. The reduction probably reflects Berkshire rethinking its bank exposure amid COVID-19’s fallout, and a shift toward Bank of America, in part because of frustration with the pace of Wells Fargo’s cleanup, said David Kass, a professor of finance at the University of Maryland’s Robert H. Smith School of Business.

Buffett has hinted at other considerations as well. When Wells Fargo was seeking a new CEO in 2019, he warned the lender not to pick someone from Wall Street. Its board chose Scharf, who previously ran Bank of New York Mellon Corp. and was a former lieutenant to Jamie Dimon at JPMorgan Chase & Co. Charlie Munger, Buffett’s longtime business partner and a Berkshire vice chairman, later criticized Scharf for planning to run the San Francisco-based bank from New York.

Berkshire pulled back from a number of financial firms after the pandemic erupted, cutting stakes in Goldman Sachs Group Inc. and JPMorgan. Its exposure to banks, insurers and other financial firms dropped to about 26 per cent on a cost basis at the end of September from roughly 37 per cent at the end of 2019, before the COVID-19 crisis.

While Wells Fargo shares had the biggest gains among Berkshire’s portfolio of common-stock holdings, they had a small impact for the conglomerate. If its investment in the bank was unchanged from September, Berkshire’s Wells Fargo stake would have been worth US$32.4 million at the end of 2021. Apple shares’ total return of almost 35 per cent last year, meanwhile, gave Berkshire’s stake a value of US$157.5 billion.

Bank of America remained Berkshire’s second-largest common-equity investment as of September, and the stock returned almost 50 per cent last year. Buffett has expressed his admiration for the bank’s CEO, Brian Moynihan, calling him “the most underestimated bank executive in the country.”

Generally, Buffett “likes financials, he likes banking, he understands it well,” Kass said. “And he switched his allegiance, in terms of an investment perspective, to Bank of America.”