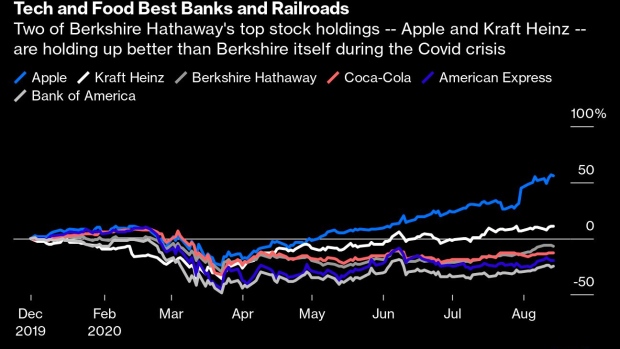 Warren Buffet, chairman and chief executive officer of Berkshire Hathaway Inc., plays bridge at an event on the sidelines of the Berkshire Hathaway annual shareholders meeting meeting in Omaha, Nebraska, U.S., on Sunday, May 6, 2019. The annual shareholders' meeting doubles as a showcase for Berkshire's dozens of businesses and a platform for its billionaire chairman and CEO to share his investing philosophy with thousands of fans. , Photographer: Bloomberg/Bloomberg

(Bloomberg Opinion) -- Dumping bank shares and investing in a gold miner? It certainly doesn’t sound like a Warren Buffett move, but that’s exactly what the investing guru’s company did in the second quarter, according to a regulatory disclosure Friday. It’s not a good sign for markets.

Buffett, the fifth-richest person in the world, has loved few things more in his life than sweets, soda and compound interest — but banking stocks have come pretty close. Buffett was there to boost them during and after the last crisis, and he’s remained a top shareholder in most of the big U.S. banks. That’s why it’s so jarring that Buffett’s Berkshire Hathaway Inc. sold 62% of its stake in JPMorgan Chase & Co. and cut 26% of its Wells Fargo & Co. holdings last period amid the Covid-19 crisis. The conglomerate also pared back positions in other financial-services firms including PNC Financial Services Group Inc., M&T Bank Corp., Bank of New York Mellon Corp., Mastercard Inc. and Visa Inc. Berkshire all but exited Goldman Sachs in the first quarter — in the first of Buffett’s worrying signals — and finished the deed in the second.

Berkshire also did away with its leftover airline positions — a move Buffett previously disclosed — and a stake in Burger King parent Restaurant Brands International Inc. Perhaps most telling was that Berkshire’s only new purchase was Barrick Gold Corp., a gold-mining giant. The stake is now valued at about $605 million, which is still relatively puny as far as Berkshire holdings go. Selling bank stocks when interest rates are low and are expected to stay that way isn’t a contrarian idea, but a bet on gold is an act of fear and not something expected from an experienced investor who has ridden out numerous downturns as Buffett has in his nearly 90 years (his milestone birthday is later this month). Buffett has even ridiculed gold hoarders in the past. Here’s a lesson he gave at the May 2018 annual Berkshire investor meeting:

Let's say you've taken $10,000 and you listen to the prophets of doom and gloom around you — and you'll get that constantly throughout your life. And instead, you use the $10,000 to buy gold. Now, for your $10,000 you would have been able to buy about 300 ounces of gold. And while the businesses were reinvesting in more plants and new inventions came along, you would get down every year and you look in your safe deposit box and you'd have your 300 ounces of gold. And you could look at it and you could fondle it and you could, I mean, whatever you wanted to do with it. But it didn't produce anything. It was never going to produce anything. And what would you have today? You would have 300 ounces of gold just like you had in March of 1942.

Now, Buffett isn’t stacking gold bars in his basement, but he’s still wagering on the precious metal. Berkshire’s top five investments remained unchanged: Apple Inc., Bank of America Corp., Coca-Cola Co., American Express Inc. and Kraft Heinz Co.; however, it has been buying more Bank of America shares in recent weeks, which are too recent to show up in Friday’s filing. Apple now accounts for nearly half the value of Berkshire’s $221 billion equity portfolio and is performing much better than Berkshire itself. Buffett used to joke that he’s “one-quarter Coca-Cola,” but he can switch that to Apple now.

To be fair, it’s not clear who exactly made these investing decisions, a responsibility Buffett shares with Todd Combs and Ted Weschler, his stock-picking deputies. Either way, Berkshire sold about $13 billion of stocks when one would expect Buffett, a stalwart believer in the U.S. economy, to go on a buying spree. It’s not as if Berkshire needs the cash — it had a mind-boggling $147 billion as of June.

As I wrote last week, it would help in times like these if Buffett held quarterly earnings calls to get a better understanding of his frame of mind. The last time investors heard from him was the virtual shareholder meeting in May, during which he said: “Nothing can stop America.” It’s not that he doesn’t believe that any longer, but these latest moves — hoarding cash and finding gold-mining attractive — suggest he sees the crisis lasting longer and perhaps getting worse before it gets better. No one knows whether that will be the case, but Buffett has his finger on the pulse of the economy by way of all the various industries Berkshire operates in: from freight railroads to airplane parts, insurance policies to car dealerships, bricks for home construction to Fruit of the Loom underwear, industrial chemicals to Dairy Queen fast food, jewelry stores to private jets and much more.

For Buffett’s big birthday, I had thought he’d want a big acquisition — the elusive “elephant” he’s talked of for so long. But maybe just ship some bullion bars to Omaha instead.