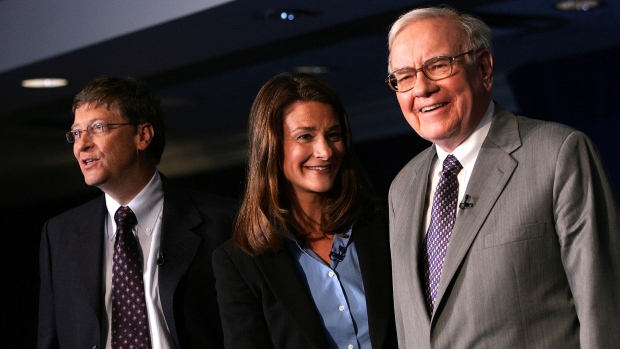 (Bloomberg) -- Warren Buffett is getting out from the middle of a potentially contentious split.

As his friends Bill Gates and Melinda French Gates grapple with a divorce and its implications for the pair’s $50 billion foundation, the Berkshire Hathaway Inc. executive is stepping down as one of the foundation’s trustees. Buffett made clear he had an “inactive” role on the board, but he was one of just three trustees, which could have placed him in the role of taking sides over its future direction, a potentially fraught situation as the only other board members are the now ex-couple.

“My goals are 100% in sync with those of the foundation, and my physical participation is in no way needed to achieve these goals,” Buffett said Wednesday in a statement that also addressed his charitable giving, tax topics and dynastic wealth.

It’s another sign that the 90-year-old billionaire is winding down some of his responsibilities and is consistent with his longstanding desire to skirt some issues rife with conflict. Since Bill Gates and Melinda French Gates announced their divorce last month after 27 years of marriage, there have been reports of infidelity, Gates’s ties to the late pedophile Jeffrey Epstein and coverage that his money manager Michael Larson operated a toxic work environment.

That’s raised concern that Bill and Melinda French Gates will struggle to work together at the foundation, where their priorities have already somewhat diverged. Despite assurances that nothing would change following their split, some employees are nervous about the direction of the organization.

Suzman said he plans to share more information next month.

Buffett has given almost $33 billion to the foundation since joining the board in 2006.

Gates said that when they first got word about about Buffett’s initial donation “we were speechless.”

“It was the biggest single gift anyone had ever given anybody for anything,” according to a statement posted on the foundation website after Buffett said he was stepping down.

Suzman wrote that Buffett’s gifts “helped to save literally millions of lives – from the provision of life-saving vaccines to treatments and protection from deadly diseases like HIV, TB and malaria. His generosity has helped millions of people lift themselves and their families out of extreme poverty globally.”

Buffett said in his statement that his total philanthropic giving has reached more than $41 billion and he’s now halfway toward distributing all of his Berkshire shares to five foundations. He also said he’s dedicated more money to charity instead of donating his time, calling the work of people who donate both time and effort “a much more admirable form of philanthropy than mine.”

Despite having given away half of those shares, Buffett is richer than when he started. Back in June 2006 when he pledged to give away all of his shares, the 474,998 shares were worth about $44 billion. Today, he’s left with 238,624, slightly more than half of what he had 15 years ago.

Because Berkshire’s share price has gone up so much, it’s worth about $100 billion. Buffett is the world’s eighth-richest person, according to the Bloomberg Billionaires Index, just four spots behind Bill Gates.

Buffett said his role as trustee was inactive, suggesting that Bill and Melinda French Gates were largely deciding the direction of billions of dollars in grants the foundation makes each year.

“This is a sign that the leadership was narrower than was previously publicized,” said Linsey McGoey, a professor of sociology and director of the Center for Research in Economic Sociology and Innovation at the University of Essex, adding she hopes they take their time in crafting a new board.

“They need to consult widely on what type of representation would be best,” said McGoey, also the author of “No Such Thing as a Free Gift: The Gates Foundation and the Price of Philanthropy.”

She said she hopes they’ll add a diversity of backgrounds and opinions and that it won’t just include billionaires.

Ultimately, it’s the board of philanthropic foundations that set the course for the organization and decide what to prioritize. A three-person board is unusually small for something the size of the Gates Foundation. The Ford Foundation, which is roughly a fifth as large as the Gates Foundation, has 15 members on its board. The Rockefeller Foundation, at a 10th size, has no fewer than 12 at any time. Neither of those organizations have living donors, who can add extra weight in decision making.

The divorce put Buffett in an awkward position as tie-breaker for the two exes, Greg Witkowski, a senior lecturer of nonprofit management at Columbia University, said shortly after the split was announced.

For now, the pullback from the foundation gives Buffett a way to avoid the potential messiness of a split between two of his longtime friends. Beyond the work Bill Gates previously did serving on Berkshire’s board until his resignation last year, he and Buffett have maintained a personal friendship, routinely playing bridge together.

“Buffett maybe wants to steer clear of the personal conflict between Bill and Melinda Gates and keep his own personal relationships with both of them separate from this decision,” said David Kass, a professor of finance at the University of Maryland’s Robert H. Smith School of Business.

Buffett has been dialing back some of his time commitments, even as he warns investors that his remarks Wednesday are “no swan song.” He noted that the resignation as a foundation trustee is just another step away from boards that he’s made over the years, including his pullback from companies such as Kraft Heinz Co. and Coca-Cola Co.

Even at his conglomerate, where he still holds the top job, Buffett has put in place a succession plan with two key deputies overseeing the business operations and another pair of deputies helping out on investments. In May, he confirmed that Greg Abel, the former energy executive now tasked with overseeing all non-insurance businesses, was the leading candidate if, and when, he steps down.

Still, the investor’s statement Wednesday signaled continued support for the foundation, and some Buffett family foundations, with $4.1 billion in donations.