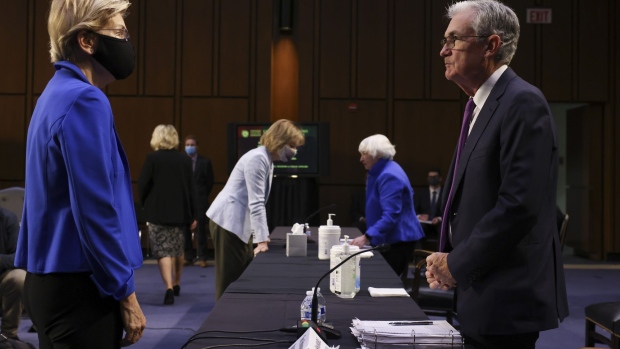 Senator Elizabeth Warren, a Democrat from Massachusetts, left, speaks with Jerome Powell, chairman of the U.S. Federal Reserve, during a Senate Banking, Housing and Urban Affairs Committee hearing in Washington, D.C., U.S., on Tuesday, Sept. 28, 2021. The Treasury secretary today warned that her department will effectively run out of cash around Oct. 18 unless legislative action is taken to suspend or increase the federal debt limit, putting pressure on lawmakers to avert a default on U.S. obligations. , Bloomberg

(Bloomberg) -- Democratic Senator Elizabeth Warren said that she vehemently denounced Federal Reserve Chair Jerome Powell to his face as “a dangerous man” on Tuesday because he was making it too easy for big banks to take big risks.

“The Fed chair should be like a sentry, standing at the gates, making certain that banks are not loading up on risks that could take down the entire economy,” Warren told Bloomberg News.

She spoke after a Senate Banking Committee hearing in which she became the first Democrat to come out against Powell for another term as Fed chair, telling him that his actions “make our banking system less safe.”

Powell has been seen as a likely choice for a second term, when his current term as chair expires in February. Bloomberg News has reported that President Joe Biden’s aides are considering recommending that the president renominate Powell and elevate Fed Governor Lael Brainard, who is more liberal, to the position of vice chair of supervision, a key regulatory post.

Powell has the backing of Treasury Secretary Janet Yellen for another term.

Yet Warren suggested Tuesday that Powell has given in too many times to bank lobbyists.

“Those banks are buying greater profitability at the price of taking on more risk,” she said. “It’s not so much that any one decision is wrong, it’s that they’re all directionally in the same place and they have additive effects.”

The Massachusetts senator who rose to prominence chiding Wall Street’s risky financial bets -- and ran against Biden for the 2020 Democratic presidential nomination -- said she worries that Powell’s actions to deregulate the banks would leave the financial system headed down the same risky road, and taxpayers potentially on the hook for hundreds of billions of dollars in bailouts.

“I’m not here in the United States Senate to see that happen again,” Warren said.

During the hearing, she challenged Powell on whether he regretted three key deregulatory actions she argues have made the nation less safe: A weakening of stress tests for big banks, the weakening of the Volcker Rule limits on bank investments, and reduced liquidity requirements on banks with between $250 billion and $700 billion in assets.

Powell disputed her characterization of those actions in part, but didn’t say he regretted them. He said he was willing to review those actions.

“Your record causes me grave concern: over and over you have acted to make our banking system less safe,” she told Powell. “That makes you a dangerous man to head up the Fed, and that’s why I’ll oppose your re-nomination.”

Asked if she had made her views known to the White House, Warren declined to discuss her conversations with administration officials, nor would she say who she would like to see nominated instead. She has praised Brainard’s dissents of the Fed’s deregulatory actions.

Warren said Biden has other people he could choose for the job, and suggested other senators might now put Powell under more scrutiny too. “I think it is possible that other senators may take a harder look at Powell and his record,” she said.

Warren’s decision now presents Biden with a tough choice -- defy a progressive stalwart and name Powell anyway -- or go in a different direction and risk upsetting moderates like Jon Tester of Montana and navigating a tough confirmation vote in a 50-50 Senate.