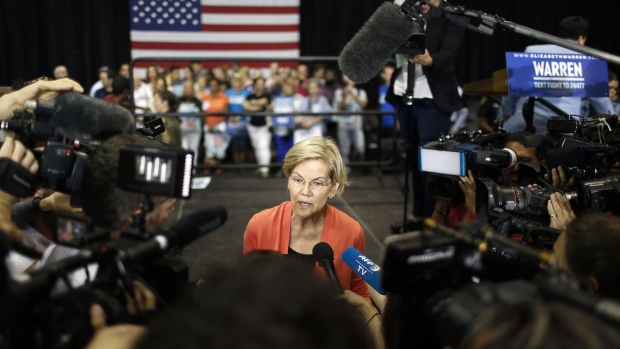 In a clip shared on an anonymous pro-Trump Twitter account Tuesday and amplified by conservative media, an unnamed man tells Warren that he gave up vacations and saved money for his daughter’s education so that she wouldn’t have debt. “We did the right thing and we get screwed,” he said of her plan.

Asked about the clip in an interview on “CBS This Morning,” Warren responded that younger Americans are getting “crushed” by student loan debt, which is roughly $1.5 trillion.

”Look, we build a future going forward by making it better,” she said. “By that same logic what would we have done? Not started Social Security because we didn’t start it last week for you or last month for you?”

Some of the Democratic candidates will debate again in New Hampshire on Feb. 7.

The first-in-the-nation Iowa caucuses will be held Feb. 3. The New Hampshire primary is Feb. 11. Nevada holds its caucuses on Feb. 22 and South Carolina has a primary on Feb. 29.

To contact the reporter on this story: Ryan Teague Beckwith in Washington at rbeckwith3@bloomberg.net

To contact the editors responsible for this story: Wendy Benjaminson at wbenjaminson@bloomberg.net, Magan Crane