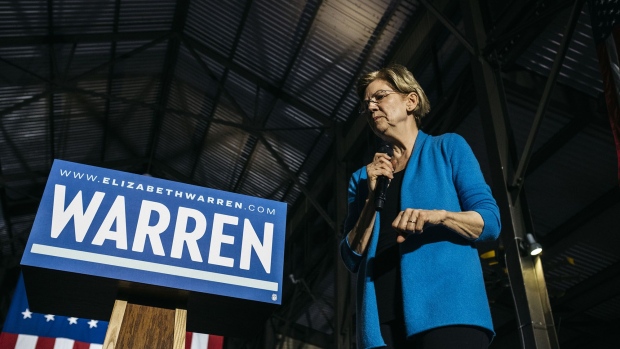 Elizabeth Warren suspended her presidential campaign Thursday after finding no path to the Democratic nomination and gave no indication whether she would support fellow progressive Bernie Sanders or the more centrist and newly resurgent front-runner Joe Biden.

“I want to take a little time to think a little more,” she told reporters.

Warren said she believed she could be a bridge between the progressive and centrist wings of the Democratic Party, but the election results showed that was not the case.

Sanders told reporters he would “love to have her” as part of his movement.

“There is no question that her agenda what she fought for her campaign is far closer to what I am fighting for” than Biden, Sanders said as he was leaving Vermont for a campaign event in Arizona.

Although she was already known for her progressive ideas, Warren endorsed Hillary Clinton over Sanders in 2016.

At her news conference, Warren was asked about whether she thought gender played a role in her failed campaign. She said that was a “trap question” for women.

“If you say, ‘Yeah, there was sexism in this race everyone says, ‘Whiner!’” Warren said. “And if you say, ‘No, there was no sexism’ about a bazillion women think: ‘What planet do you live on?’” she added.

“All those little girls are going to have to wait four more years,” she said of those who were inspired by the thought of the first female president. “That’s going to be hard,” she said.

But House Speaker Nancy Pelosi said Warren’s withdrawal showed there was “an element of misogyny” in the presidential race.

“Every time I get introduced as the most powerful woman, I almost cry because I wish that were not true,” Pelosi said. “I so wish that we had a woman president of the United States and we came very close to doing that.”

Warren made her announcement in the same place she kicked off her campaign -- outside her house in Cambridge, Massachusetts. As she walked out her front door, the crowd outside cheered “we love you” and “thank you.” She was accompanied by her husband, Bruce, and her dog, Bailey.

The Massachusetts senator never placed higher than third in any primary contest and decided to drop out after failing to win any of the 14 states that voted on Super Tuesday. Her detailed policy proposals proved insufficient to build support from the broad, racially diverse base needed to unite the party.

Even as she was losing the first few contests, Warren was delivering strong debate performances that damaged Michael Bloomberg, who ended his nomination quest on Wednesday.

In a call with supporters on Thursday, she seemed to take credit for taking the former New York City mayor out of the race.

“In this campaign, we have been willing to fight, and, when necessary, we left plenty of blood and teeth on the floor. And I can think of one billionaire who has been denied the chance to buy this election,” she said.

Throughout the campaign, her “I have a plan for that” pitch was insufficient to overcome voters’ doubts about her ability to beat Donald Trump. She found herself squeezed between a progressive electorate that increasingly favored Sanders and moderates who saw her as too far left to bring in the swing-state voters a Democratic nominee will need in the fall.

Her withdrawal is a dramatic reversal for a candidate who had been tied with Biden for first place in October 2019. But in recent months, she was bumped out of the top as Bloomberg ramped up his campaign and Sanders took the lead.

Warren, who entered the race in late 2018, became known for her aggressive criticisms of Wall Street and Washington, her plans to tax wealth and her push to regulate large corporations, which she often said were cheating ordinary people.

“When you see a government that works great for those with money and it’s not working so well for everyone else, that is corruption, pure and simple, and we need to call it out for what it is,” she said at a January rally in Oklahoma City.

While she described herself as a “capitalist in my bones,” the strength of her left-leaning campaign alarmed Wall Street and prompted warnings from billionaires and corporate executives that she intended to tear down the system. She also was a frequent target of Trump, who gave her the nickname “Pocohantas,” a reference to her claim of Native American ancestry that she later recanted and offered an apology.

Warren developed more policy proposals than any of her rivals, rolling out about 80 plans with a total price tag of US$30 trillion. Her best-known proposal -- for a wealth tax -- called for a 2 per cent levy on America’s richest families, which she said would raise US$2.75 trillion over a decade to pay for sweeping proposals for universal health care and canceling student debt.​

​Her advocacy dated back to her time as a Harvard law professor and endeared her to a voters eager for a sharp left turn for the Democratic Party. But even as she embraced some of the most liberal policies ever espoused by a presidential candidate she ultimately was unable to seize the progressive mantle from Sanders.

Michael Bloomberg is the founder of Bloomberg LP, whose news division is a content partner of BNN Bloomberg.