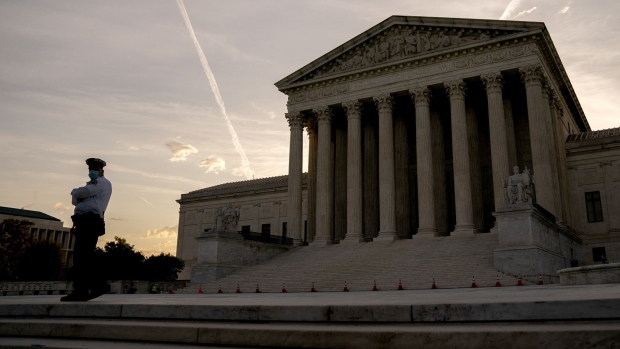 A police officer stands in front of the U.S. Supreme Court in Washington, D.C., U.S., on Tuesday, April 27, 2021. President Biden and House Democrats are clashing over how much to prioritize an extension of an expanded tax credit for parents. Photographer: Stefani Reynolds/Bloomberg , Bloomberg

(Bloomberg) -- Senator Elizabeth Warren and Representative Pramila Jayapal raised concerns over “stunning” ethics violations by judges who oversaw cases involving companies in which they had stakes.

The Democratic lawmakers questioned whether Supreme Court Chief Justice John Roberts has done enough to establish and enforce ethics rules. Judges should disqualify themselves from proceedings if they have financial interest in a party involved, Warren and Jayapal said in a letter to Roberts.

“Even when judges recuse themselves, they frequently do not state their reasons for recusal,” Warren and Jayapal said. “And when litigants discover that a judge failed to properly disqualify, they often have little recourse; there are no civil or criminal penalties.”

The “extensive ethics breaches” are at least partly due to an inadequate process for accountability, the lawmakers said. The Judicial Conference rarely issues punishments for misconduct, according to the letter.