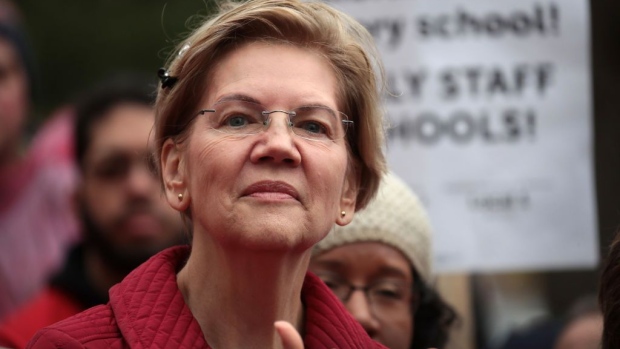 Senator Elizabeth Warren said Friday she would vote for the U.S.-Mexico-Canada trade agreement, joining moderate Democratic competitors Joe Biden and Amy Klobuchar while distancing herself from progressive Bernie Sanders, an opponent of the accord.

Warren said the deal would “help open up some markets for farmers” who “need that stability.”

“Workers have had the legs taken out from underneath them and this agreement makes improvements,” she said Friday in an interview with the CBS TV affiliate in Boston. “It’s going to help with enforceable labor standards, and that’s going to be useful.”

Warren said she would vote yes on the agreement “and I’ll tell you why: this latest round with Donald Trump over the past three years, has just slammed our farmers, they’ve lost markets, not just in the NAFTA countries but around the world, and it’s really, really put them in a squeeze.”

The Senate could vote to pass the USMCA as early as next week. The accord, which replaces the North American Free Trade Agreement, was passed by the House in December, after it drew broad support from Republicans, Democrats, labor groups and businesses.

Warren had previously criticized the deal. During a 2018 speech on foreign policy at American University in Washington she raised concerns that the deal, as written, wouldn’t halt outsourcing, raise wages or create jobs, referring to it as “Nafta 2.0.”

Her campaign said that the revised deal offered stronger labor standards, more certainty for farmers and dropped a provision that would make it harder to bring down prescription drug prices.

At the Democratic presidential debate in Los Angeles in December, Warren didn’t answer a question about how she planned to vote. By contrast, Sanders said that while the deal improved on Nafta, it fell far short of protecting jobs and he wouldn’t vote in favor.

Warren and Sanders are vying for the support of progressive Democrats, but have largely refrained from criticizing each other. When asked whether her support for USMCA showed a difference with Sanders, she dodged the question.

“I want to see improvement for our farmers and workers. It’s not as much improvement as I’d like to see, but right now they’re in a terrible hole where Donald Trump has put them. I want to get them out of that hole,” Warren said. “Bernie sees this differently, obviously. You’ll have to ask Bernie his reasons.”