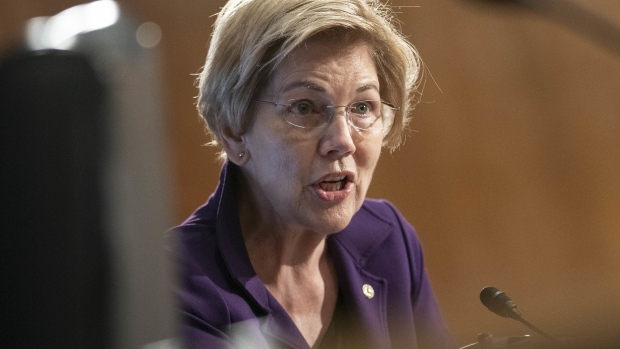 Senator Elizabeth Warren, a Democrat from Massachusetts, speaks during a Senate Banking, Housing, and Urban Affairs Committee hearing in Washington, D.C., U.S., on Tuesday, Oct. 19, 2021. The rise of digital currencies and a decline in the use of the dollar by U.S. adversaries are driving calls for a more multilateral approach to sanctions policy at the Treasury Department as the U.S. tries to keep up with changes in the global financial system. , Bloomberg

(Bloomberg) -- The Consumer Financial Protection Bureau has a key role in policing cryptocurrency payments and doesn’t need to wait for other agencies to act before taking steps to crack down on abuses in the market, according to Senator Elizabeth Warren.

“With their intense focus on consumers, the CFPB has a role to play as a cop on the beat,” Warren said in an interview with Bloomberg on Thursday. “Crypto infiltration of the market cuts across different regulatory agency’s jurisdiction. The answer to that is not that each agency should wait for the other to act, it’s that the agencies should all pick up the tools available to them and move.”

Americans that use digital tokens are increasingly at risk of fraud and other abuses such as not being able to get their money out of crypto exchanges, according to Warren. Lawmakers in both parties have raised concerns about the burgeoning industry following its rapid growth and regulators have signaled a crackdown is coming.

CFPB Director Rohit Chopra said at a hearing before the Senate Banking Committee Thursday that he intends to look closely at how technology giants including Facebook Inc. plan to use digital currencies as part of his wider probe into how the companies are harvesting and using consumer financial data.