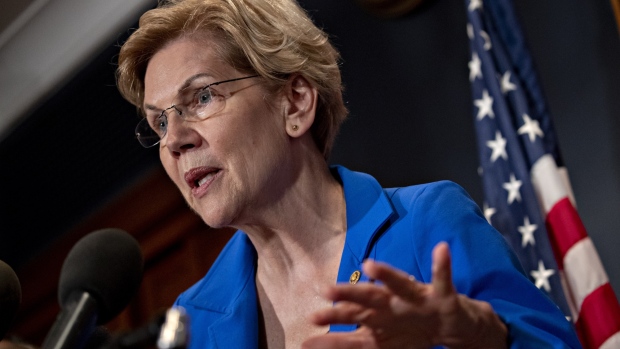 Senator Elizabeth Warren waded into last month’s turmoil in short-term funding markets, warning Treasury Secretary Steven Mnuchin not to use the incident as a rationale for weakening post-financial crisis regulations.

Warren, a front-runner in the race to challenge Donald Trump in the 2020 U.S. presidential election, sent a letter to the Treasury on Friday. In it, she sought Mnuchin’s views on what triggered the spike in rates for repurchase agreements and expressed concern about potential costs to businesses and consumers if strains persist.

She also set herself up for another fight with Wall Street, citing an article reporting that large banks were using the repo-market chaos to pressure the Federal Reserve to weaken liquidity rules they despise. Warren said she’s concerned the Financial Stability Oversight Council, whose chair is Mnuchin, might support those efforts.

“These rules were designed to ensure that banks have enough cash on hand to meet their obligations in the event of another market crash,” Warren said. “Banks are reporting profits at record levels, and it would be painfully ironic if unexplained chaos in a small corner of the banking market became an excuse to further loosen rules that protect the economy from these types of risks.”

Banking industry complaints about regulations have gotten louder since the mid-September dislocation. JPMorgan Chase & Co. Chief Executive Officer Jamie Dimon said Oct. 15 that the bank had the money and inclination to step in when rates surged, but liquidity rules prevented it from doing so.

Regulations introduced after the 2008 crisis oblige financial institutions to hold more cash and cash-like assets as a buffer against times of stress, and systemically important banks -- JPMorgan is the largest in the U.S. -- face year-end reviews to determine how much more common equity they must carry.

The Fed has been injecting liquidity into the funding markets since Sept. 17, when the rate on overnight general collateral repo jumped to 10 per cent from around 2 per cent. The central bank has also begun buying Treasury bills to add reserves back into the system. These efforts have mostly calmed repo rates.

“While the Federal Reserve has taken the necessary action to ensure that markets continue to function, I am alarmed that it has been required to engage in money market interventions that have not been used since the 2008 financial crisis,” wrote Warren, a Democrat from Massachusetts.

Warren came to prominence because of her criticisms of Wall Street and calls for tougher oversight of the financial industry after the 2008 financial crisis. Her advocacy was pivotal to the creation of the Consumer Financial Protection Bureau and helped lock in her election to the Senate.

Warren asked that Mnuchin respond to these and other questions no later than Nov. 1: