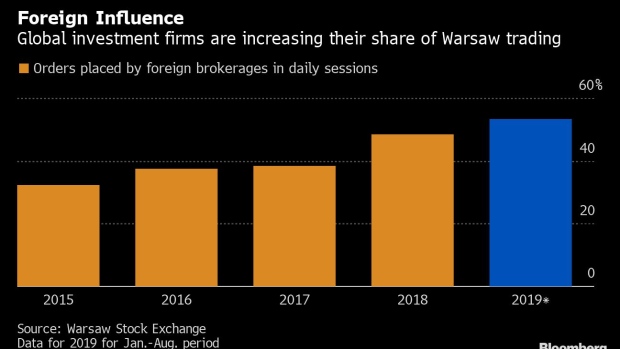 (Bloomberg) -- European Union regulations may have made analyst research costlier for investors, but Warsaw’s stock exchange is trying to ease the pain. It has started paying brokerages to write reports and distributing these free to its members.

A dozen Polish brokerages are being paid 50,000 zloty ($12,500) to cover a single company under a program that has generated reports on about 40 mid-sized companies selected by the bourse. The exchange operator requires the research to continue for two years with the reports regularly updated.

Central Europe’s largest exchange, with 460 companies traded on its main board, wants the initiative to boost the profile of smaller companies at greater risk of being overlooked after the EU’s MiFID II regulations put a separate price on research. It’s also a bid to counter growing dominance from larger-scale and more tech-savvy foreign investment firms who skip local intermediaries when placing stock orders.

MiFID II has given impetus to the business in Europe of companies paying financial firms to write reports about them in an attempt to stay on investors’ radars. That’s prompted some concerns that analysts may be reluctant to express negative views about a company or set a sell recommendation when its paying them for their work.

Research sponsored by a stock exchange instead may hold the attraction of avoiding any potential conflict of interest, said Michal Stalmach, a money manager at Skarbiec TFI SA asset management, who describes the Warsaw exchange’s program as a “clearly positive” initiative.

“It’s not companies, but the bourse who is paying for these reports, and they are written by specialized analysts intent on retaining their credibility,” said Stalmach. “Any initially optimistic approach toward a stock may derive from the very low valuations in the mid and small cap-segment. Besides, we expect analysts will scrutinize companies’ strategic performance in updates of their reports.”

Euronext NV and Deutsche Boerse AG are among western European exchanges offering smaller companies support through subsidizing their access to investor services. The Warsaw operator, confronted by a dearth of initial public offerings and a drop in liquidity in recent years, is taking more direct action as it seeks to revive Poland’s glory days of investor participation during the wave of privatizations in 2006-2012.

“We are seeing an increase in interest in covered companies, which may translate in the future into higher liquidity,” Izabela Olszewska, the exchange’s deputy chief executive officer, said in an emailed response to questions. “Still, we have to wait for the program’s long-term effect, especially as we are after more fundamental coverage and not just technical trade recommendations.”

Ten companies targeted by the program are being followed by analysts for the first time, while 12 others previously had just a single analyst watching their stock, according to the exchange.

The Budapest Stock Exchange started a similar effort involving five brokerages in 2017, and reported a 20% increase in trading volumes for the covered stocks in the two years since, compared with a rise of 2.4% in the overall market. The operator, which has extended its program into 2021, won’t say how much it pays for the research reports.

In Poland, the move came as a relief during a drought of public offerings and falling volumes. “The bourse’s initiative and the fees they’re offering have helped us to maintain our analytical staffing headcount, despite slowing business,” said Radoslaw Olszewski, head of the brokerage at BOS Bank, which has enrolled in the plan. “Trading volumes increased in recent months for the companies we cover. If this continues, it will confirm that companies are benefiting from the boost to their visibility.”

--With assistance from Veronika Gulyas.

To contact the reporter on this story: Konrad Krasuski in Warsaw at kkrasuski@bloomberg.net

To contact the editors responsible for this story: Blaise Robinson at brobinson58@bloomberg.net, John Viljoen, Celeste Perri