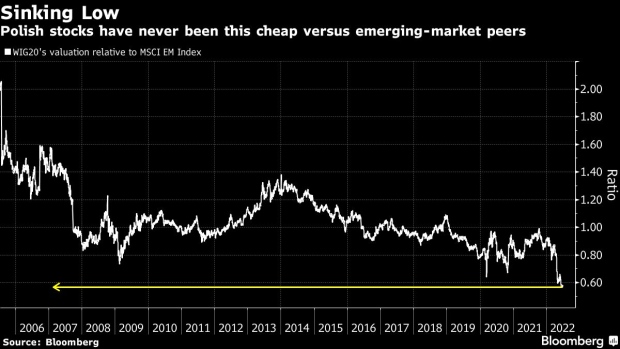 Lubawa SA, a manufacturer of military gear including vests and helmets, along with coal miners JSW SA and Lubelski Wegiel Bogdanka SA, are also among the top gainers.

Besides these star performers, investors have mostly dumped Polish stocks due in part to the proximity of war across the border in Ukraine, as well as local headwinds. The highest inflation in nearly a quarter century is eating into consumer spending while the government is targeting bank profits with loan moratoriums.

The WIG20 has declined 31% in dollar terms this year, nearly double the loss on the MSCI Emerging Market Index. And with local mutual funds seeing net redemptions, strategists aren’t expecting a turnaround in Warsaw anytime soon.

“After two stronger years for the stock exchange, we are now facing a weak moment that may last longer,” said Tomasz Bardzilowski, head of investment banking in Ipopema Securities SA. “With bonds yielding near 10% and worries about a recession, it’s hard to convince people to buy stocks.”

The selloff has made Polish stocks the cheapest ever relative to developing peers. The WIG20 now trades at a 43% discount to the MSCI Emerging Markets Index, compared with a valuation premium of more than 100% in 2005 and near parity as late as last October.