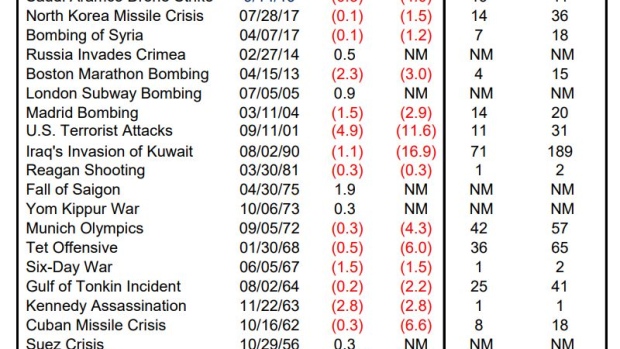 (Bloomberg) -- In addition to bull cases premised on rising earnings, economic resilience and the possibility of a softening Federal Reserve, another can be developed from an analysis of the history of global conflict.

While there are of course important exceptions, some of which arguably have special relevance for now, a review of military events going back eight decades shows that wars -- for all their humanitarian devastation -- don’t have a record of creating lasting losses in markets.

Sam Stovall, chief investment strategist at CFRA, looked at 24 geopolitical events since the end of World War II and found the market tended to sell off on surprise news by an average of 1%. It bottomed after a total decline averaging 5.5%, and though it took about 24 days to reach bottom, it went on to recoup all that it lost in 52 days.

“History reminds investors that surprise military and terrorist activities have traditionally been short-lived and represented an attractive buying opportunity,” Stovall wrote in a recent note.

Stovall analyzed events including last year’s collapse of the Afghan government, as well as bombing attacks in Boston, London and Madrid.

The U.S. and its European allies have ratcheted up their response to Russia’s invasion of Ukraine. They have announced plans to sanction the nation’s central bank and to cut off various Russian lenders from the SWIFT financial messaging system.

Russia’s currency and bonds plunged and authorities scrambled to shore up defenses against sanctions. The S&P 500 fell as much as 1.3% Monday before paring losses.

On Wall Street, no one has an upper hand on how the conflict could unfold or what it might mean for the world’s geopolitical order. Nor has it been easy for investors to predict how sanctions against Russia might hit or how the price of oil will behave.

Despite all the unknowns, there have been signs investors are willing to wade back in. Dip buying Friday helped the S&P 500 to its first weekly gain in three. Still, the gauge remains more than 8% below its January record high.

Marko Papic, chief strategist at the Clocktower Group, has assessed more than 50 events going back to the mid-1950s. He says the median return on the S&P 500 a year out has been 11.7%.

“Since the end of World War II, geopolitical conflicts have been -- almost exclusively -- buying opportunities,” he wrote in a note. The exception was the 1973 Yom Kippur War between Israel and its neighbors, which led to the OPEC oil embargo. The S&P 500 fell as much as 16% then and was still down more than 40% a year later, Papic’s work shows.

Papic said in an interview that Ukraine’s situation could get worse if fighting intensifies and drags on. “There’s so many things that can go wrong,” he said while noting that there is a lot of pressure on Russia to stop the invasion.

Read More: Stocks Hedges Pay Off After Another Week of Wild Market Swings

Callie Cox, a U.S. investment analyst at eToro, has also been parsing historical trends. She says the S&P 500 has fallen 10% or more 33 times over the last 72 years, but has notched 8% average annual returns over that time.

“It may take time for the market to process what’s happening,” she said. “But as history has shown us, humans are resilient, and society can overcome tragedy. And the stock market has followed suit.”