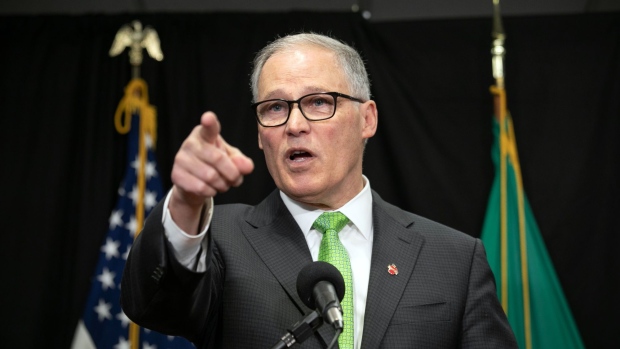 (Bloomberg) -- Washington Gov. Jay Inslee is set to sign a law today mandating that a broad swath of industries essentially eliminate greenhouse gas emissions by 2050. The new standards, the most aggressive in the nation, will go into effect in 2023.

The Climate Commitment Act sets a cap on greenhouse gas and creates a market where polluting industries buy and sell credits from the state for every ton of greenhouse gas they emit. Over time the state will reduce the numbers of credits it sells, forcing polluters to adapt or compete for a dwindling number of allowances. Businesses that have to buy and sell in the new marketplace include refineries, manufacturers, and power companies. Agriculture is exempted.

Environmental groups hailed the bill as a template that they hope will be copied. “Washington is doing what no other state has done,” said Pam Kiely, a U.S. climate expert at the Environmental Defense Fund. “Other states have set ambitious goals, but very few are translating rhetorical commitments into policy.”

Only California, which launched a carbon market in 2013, has similarly aggressive greenhouse gas caps in place, but currently their caps don’t extend past 2030, when all the easier carbon reductions will presumably have already have been met.

Not only does the Washington bill extend out to 2050, it is breaking new ground on environmental justice. As carbon allowances become rarer, their price is expected to increase; the state is currently estimating the carbon caps could bring in billions in revenue over the next decade. At least 35% of that money will be invested in communities disproportionately affected by environmental pollution.

Additionally, the law says that if air pollution in such communities doesn’t decline quickly enough, additional steps can be taken by regulators to target local sources of that pollution.

Washington’s law comes as President Joe Biden has committed the U.S. to cutting national greenhouse gas emissions by 50% by 2030. He’s also said that 40% of new infrastructure spending will be put toward vulnerable low income communities. Biden’s plan was inspired in part by  Inslee, who ran for president and made climate the centerpiece of his campaign.

Under Inslee, Washington has been steadily enacting decarbonizing legislation — including requiring utilities to be carbon neutral by 2030 and giving $170 million in tax incentives for transportation electrification. The new law is the first that will cover nearly 75% of the state’s emissions.

The new legislation passed without a single Republican vote. Also, two ballot attempts to set a price on carbon emissions were rejected by voters in 2016 and 2018. That may indicate the low likelihood of this kind of legislation being duplicated elsewhere. Critics contend it will hurt industry, but advocates say that California offers proof of the opposite. Since its carbon caps have been in effect, big industry has seen productivity increase as emissions decreased, Kiely said.

“Not all emissions are well suited to cap and trade system, but as long as you’ve got a reasonable number of allowances they work pretty well,”  said Adele Morris, an energy economist at the Brookings Institution. “Still, this is very ambitious and will require technologies that are not yet available at scale to deeply decarbonize, so it is hard to predict costs.”

As to the concern that this legislation could drive businesses out of state, Morris said that she suspected Washington’s CEOs had seen this coming for “a long time, and have taken it into account in their business planning.”