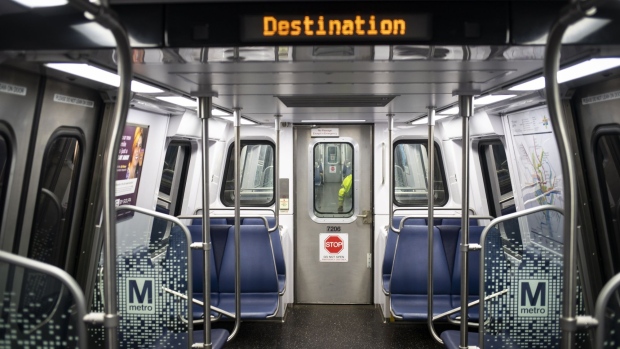 An empty subway car rides is seen on the red line from Union Station to Chinatown stations in Washington, D.C. , Bloomberg

(Bloomberg) -- A flaw linked to the derailment of a Washington, D.C., area subway train last week was found on dozens of other cars and investigators urged transit systems with similar equipment across the U.S. to conduct urgent inspections.

The Oct. 12 incident in Virginia on the Washington Metropolitan Area Transit Authority system could have been “catastrophic,” National Transportation Safety Board Chairwoman Jennifer Homendy said at a briefing in Washington Monday.

A total of 39 similar flaws with wheels have been found this year on WMATA rail cars, including 21 on Friday in inspections after the accident, she said.

“I would say if you are a transit agency operating in the United States and you are listening, make sure you are checking your cars as well,” she said.

The NTSB hasn’t yet issued a formal call for inspections at other rail systems, but Homendy said the agency was considering issuing an urgent recommendation. The so-called series 7000 cars were made by Kawasaki Rail Car Inc., according to NTSB.

Kawasaki didn’t respond to an emailed request for comment.

“As Metro continues to work closely with the Washington Metrorail Safety Commission and NTSB and more information develops, we will update the public about service for the remainder of this week,” WMATA said in a statement posted on its website Sunday.

WMATA on Sunday took all 7000-series cars out of service, representing 60% of the fleet, in the wake of the derailment in a tunnel near Arlington National Cemetery. The system was operating on a drastically reduced schedule Monday.

“As Metro continues to work closely with the Washington Metrorail Safety Commission and NTSB and more information develops, we will update the public about service for the remainder of this week,” WMATA said in a statement posted on its website Sunday.

Investigators found evidence that the train involved in the accident had had at least two other minor derailments earlier on the same day. Wheels on the trains were apparently moving outward so that they became wider than the tracks, according to NTSB.

WMATA had discovered similar issues with wheels on its trains going back to 2017, Homendy said. After discovering a handful of such cases in the years since, the numbers jumped to 18 this year prior to the accident.

“We are fortunate that no fatalities or serious injuries occurred as a result of any of these derailments, but the potential for fatalities and serious injures was significant,” Homendy said. “This could have resulted in a catastrophic event, which is why we went and why it’s important that we identify these safety issues in advance so we can protect public safety.”

The NTSB is still attempting to determine why the wheels are failing in that way.

(Updates with details from press conference from seventh paragraph.)