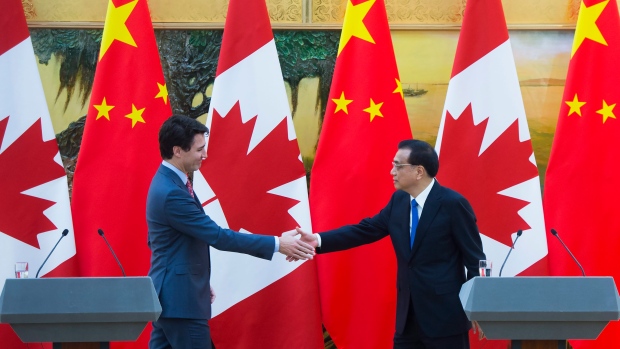 GUANGZHOU, China -- He was a curious 23-year-old in a bustling train station somewhere in China, at the height of its busiest season, Chinese New Year. He and his two friends didn't have tickets, but it didn't matter.

"It was wonderful," Prime Minister Justin Trudeau said this week in Beijing as he recalled his first adult excursion to the country. He'd been to China before, of course -- as a child, with his father visiting on official political business -- but this trip was different.

"The landscapes I got to see, the discovery of myself through travelling through China was extraordinary for me."

Trudeau referenced the formative influence of his backpacking experiences in China repeatedly this week as he tried to sell the merits of doubling the number of Chinese tourists next year. With his pursuit of free trade, it is one part of a major plan to deepen relations with the economically ascendant People's Republic, the country Pierre Trudeau established relations with the year before he was born.

The attempt to create a tourism boon comes amid concern over a more malevolent form of cross-cultural influence -- a deliberate and unprecedented effort by Chinese President Xi Jinping to project the power of his country in ways that some say amounts to international political meddling.

"China does have a strategy for influencing public opinion and political opinion in other countries on issues that are important to China," said David Mulroney, a former Canadian ambassador to China and a senior national security adviser.

Under Xi, China has undertaken a co-ordinated campaign known as the "united front" to influence events in foreign countries, including Canada, said Mulroney.

That includes mobilizing Chinese students and tapping the diaspora in Canada. During past visits by Chinese leaders to Ottawa, the Chinese embassy has bussed in students from Kingston and Montreal to counter the inevitable demonstrations against the Chinese government, he said.

The protests are commonplace, ranging from the treatment of religious minorities in Tibet to allegations of organ harvesting.

"The Chinese communist successfully links patriotism to support for the party and the government," Mulroney said. Chinese students often bristle at reading criticism about their country when abroad and feel embattled, so it can drive them to be "super patriots."

It has similarities to what Canada does in the United States by reaching out to Congress, business leaders and others to sell the merits of NAFTA -- with one key difference.

"We do that above board, we do that publicly. Where China differs is its willingness to use diaspora groups, people who have an economic stake in China to work behind the scenes," Mulroney said.

"That's a form of interference in Canadian affairs."

Despite the new assertive Chinese posture under Xi, Canada still has no choice but to engage and attempt to deepen relations even if there are some serious implications, said Paul Evans, a China expert at the University of British Columbia.

China has decided it will project itself as a "great power" in the world and "that's a phrase the Chinese have not used in my lifetime."

Mulroney said that effort includes putting pressure on academics and journalists to write favourably about Canada, he said.

During Trudeau's trip, the Communist-run Global Times ran a scathing editorial that lashed out at the Canadian media's coverage of China.

"The superiority and narcissism of the Canadian media is beyond words," the editorial declared. "This is the most genuine attitude of Chinese society."

It said that China should "not (be) in a rush to develop its relations with Canada. Let it be."

The editorial was not an isolated incident. As Trudeau arrived at Beijing's Great Hall of the People this week, security staff tried to prevent Canadian photographers from shooting his arrival by blocking their view -- a move that surprised some journalists based in Beijing. On a visit to Ottawa last year, the Chinese foreign minister berated reporters for asking a question about human rights.

And in a Canadian Press interview this summer, Chinese ambassador Lu Shaye blamed an ill-informed Canadian news media for forcing human rights onto the bilateral agenda for the Liberal government to confront. Lu said it was the role of the media "to lead and mobilize people for a common cause."

Before departing China this week, Trudeau delivered what amounted to a sermon on press freedom -- clearly destined for his hosts, as well as local media -- when asked about the Global Times editorial.

"You play an essential role: a challenge function, an information function," the prime minister told the gathered reporters.

"External factors make your job difficult. But it's an essential role that you play in the success of the society. That is my perspective. That is a perspective shared by many, and it's one that I am very happy to repeat today."

The Chinese use less hostile approaches to get their message across -- pressure Mulroney has experienced first-hand as Canada's ambassador to China from 2009 to 2012 under former Conservative prime minister Stephen Harper.

Before big visits, Mulroney said he got positive and negative approaches from his Chinese counterparts. He would be told, "'You've got to make sure the prime minister doesn't raise the following things"' -- a suggestion that would have gone nowhere with Harper.

"It never stops," said Mulroney. "It's like a warm bath they immerse you in."

Trudeau was subjected to a more benign version of relentless Chinese messaging off the top of a meeting with the secretary of the Communist Party for Guangdong province, Li Xi on Guangzhou's picturesque Shamian Island.

Instead of the usual minute of small talk that usually opens the photo-ops for such meetings, Li welcomed Trudeau with a 15-minute monologue about his province's priorities and aspirations.

When he was finished, the prime minister thanked his host for the warm welcome and remarked how vividly he recalled walking the tree-lined cobblestone streets of the neighbourhood they were in his halcyon backpacker days.

This time, Trudeau need not have mentioned his formative busman's holiday.

Li made sure to include that too in his welcoming monologue.