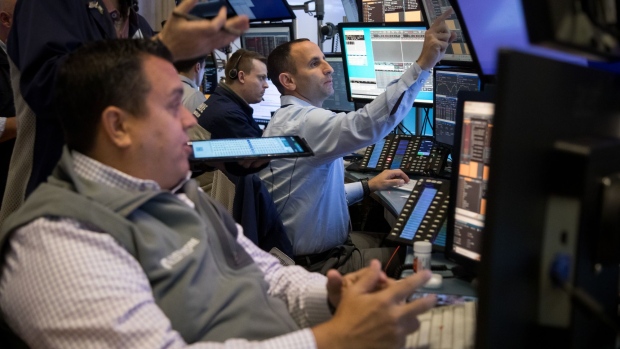 Traders work on the floor of the New York Stock Exchange (NYSE) in New York, US, on Wednesday, Nov. 9, 2022. US stocks declined following midterm elections that failed to yield a Republican sweep. Treasuries and the dollar caught bids in a sign of deteriorating risk sentiment. , Bloomberg

(Bloomberg) -- Investors watch leveraged loans for the first signs that aggressive central-bank rate hikes are starting to hit companies hard. They also brace for more FTX-like blowouts in the private equity industry and expect investment grade to do well next year.

A majority of 291 respondents to the latest MLIV Pulse survey said leveraged loans would be the canary in the coal mine to indicate that corporate credit quality is getting worse.

Any trouble for leveraged loans would represent a key shift in this credit cycle. For most of this year, buying loans seemed like a smart bet, because they carry floating interest rates and pay higher yields as central banks tighten the money supply. Even if loan prices fell a bit, the rising yields were enough to leave investors down just 0.9% for a year where most other markets are down double digits. And corporate balance sheets were still relatively strong, even for junk-rated companies.

But now companies seem more likely to default, and some investors would rather cut back on credit risk. About 28% of survey respondents expect defaults to jump significantly if US rates peak at or below 5%, which is about where the market bets the Federal Reserve will stop hiking, based on Fed funds futures. Another 63% see defaults surging if rates peak above 5%.

“While loans have performed well in an extremely challenging year, the path going forward is more problematic,” said Christian Hoffmann, a portfolio manager for Thornburg Investment Management. “As we get closer to short-term rates falling and defaults rising, the market could lose interest in the asset class.”

Part of the problem is the same feature that made loans attractive to investors: floating rates, which are now forcing highly indebted companies to make higher interest payments. And most investors expect a stagflation or deflationary recession next year, weighing on company revenues. Many money managers would rather bet on interest rates falling by buying longer-term investment-grade company bonds.

The US leveraged loan market is only a few decades old, so there isn’t robust data about how it performs during recessions. The debt fell precipitately in the Global Financial Crisis and again during the pandemic. In the 2001 recession, returns for the Morningstar LSTA US Leveraged Loan index, including interest payments and price movements, were more or less zero.

But tighter credit conditions will hurt a wide array of highly indebted companies. Default rates for US leveraged loans could rise to 9% next year if the Fed stays on its aggressive monetary-policy path, according to UBS strategist Matt Mish.

Even if many investors have bought loans this year, the debt has still faced some pressure. Prices began to dip after Russia invaded Ukraine in February, introducing fresh concerns about energy prices and global economic growth. US leveraged loans were trading at 99 cents on the dollar in January, and have since dropped to about 93 cents.

The epic collapse of the FTX crypto empire has shone a light on aggressive risk-taking and slack due diligence in the venture-capital industry. Some 94% of MLIV Pulse respondents think that further blowups will follow the bankruptcy of FTX as years of easy credit give way to a tougher business and market environment.

“Credit selection is going to be critical,” Ossino said. “As we enter a downward cycle, risk assets will be impacted and loans - as a credit risk asset class - will naturally be a participant.”

As leveraged loans are becoming less interesting to some investors, investment-grade bonds are poised to gain ground. More than half of respondents said they expected investment-grade credit to outperform next year, while about a fifth said they expected junk bonds to do better. Longer-term high-grade bonds generated returns of more than 9% in November, their best month since 2008.

Wall Street banks have also been talking lately about potentially high returns for investment-grade credit in 2023. Bank of America sees the debt generating total gains of close to 13% next year in the US, based on its index.

Investor optimism about high-grade credit has been increasingly reflected in risk premiums. Spreads for US investment-grade debt have narrowed about 35 basis points since mid-October, according to Bloomberg index data.

Investment-grade credit is typically far more sensitive than junk bonds to changes in benchmark yields, because high-grade debt tends to take longer to mature and pays less interest. That makes investment-grade debt a better bet when yields are falling, as they have been in recent weeks.

Investment-grade bonds in dollars have returned 8.7% since Oct. 21, compared with 5.2% for high yield. High-grade debt is still on course for -- by far -- its worst year on record.

--With assistance from Airielle Lowe and Tomoko Yamazaki.