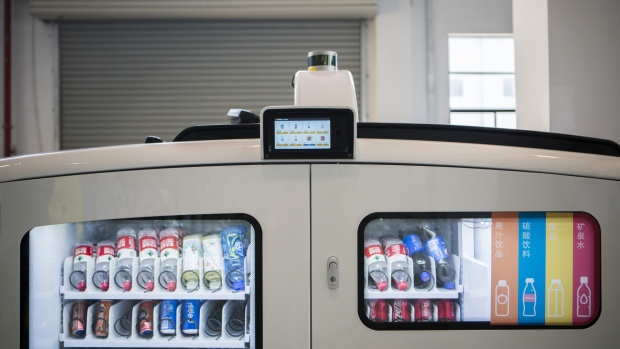 Forget drones. The future of deliveries may be robo-vans.

A Chinese startup called Neolix kicked off mass production of its self-driving delivery vehicles Friday -- saying it’s the first company globally to do so -- and has lined up giants such as JD.Com Inc. and Huawei Technologies Co. as customers. Neolix expects to deliver a thousand of the vehicles, which resemble tiny vans, within the first year as it broadens out.

The implications are potentially huge: Billionaire Jack Ma predicts there will be 1 billion deliveries a day in China within a decade and the commercialization of the technology could provide lessons for autonomous vehicles carrying passengers. Neolix isn’t alone in this space as Silicon Valley’s Nuro raised almost a billion dollars this year and is starting to deliver groceries in Arizona.

“Driverless cars will change the world, just like the shift from the carriage to the automobile,” Neolix founder Yu Enyuan, 45, said in an interview at his office in Beijing. “I have been looking for something that is worth fighting with everything I have and what I am doing now is that.”

Yu has been testing more than a hundred of the vehicles in enclosed areas such as Chinese campuses. The vehicles are priced similar to a regular car -- a Neolix van costs about US$30,000.

The entrepreneur, who was previously and inventor of smart tools for the logistics industry, said delivery of goods is just the start. Down the road, he envisages fleets of robo-vans providing everything from 24/7 mobile vending to help with running errands.

His confidence stems from the Chinese e-commerce boom that’s spawned Goliaths such as Ma’s Alibaba Group Holding Ltd., which is valued at US$400 billion.

While humans are trying to keep up and becoming more efficient with inventions such as smart lockers, there’s no doubt robots are becoming an increasing threat. With robo-vans, there’s no need for a messenger who will need a salary, and robo-vehicles are bound to have fewer accidents than humans.

One limitation: either a human needs to be present to accept the package, or the vehicle has to leave the parcel at a prearranged accessible location such as a ground-floor locker. One solution proposed by Ford Motor Co. is a small robot that walks on two legs to bring the parcel from the vehicle to the doorstep.

While self-driving cars that carry passengers still face significant regulatory obstacles, Yu says the path has been easier for unmanned delivery vehicles. The company’s vans are operating in the new Xiongan economic zone about 100 kilometres (60 miles) southwest of Beijing, as well as in limited areas of the capital and the city of Changzhou.

China’s not the only place where robo-deliveries are emerging. In the U.S., large self-driving trucks are hauling mail between Phoenix and Dallas, and Nuro started a robo-delivery service with grocer Kroger Co. in Scottsdale, Arizona, in December.

As to Yu, he decided to expand into driverless vehicles in 2016 from logistics products including smart lockers and digital assistants for delivery personnel. He is the largest shareholder of closely held Neolix. Other investors include Autohome Inc. founder Li Xiang, venture-capital firm Yunqi Partners and Glory Ventures.

Neolix’s initial production line in the eastern city of Changzhou has an annual capacity of more than 30,000 vehicles, and the company plans to set up factories overseas with partners when sales ramp up, Yu said. Neolix is talking to potential customers in countries including Switzerland, Japan and the U.S. and targets annual sales of 100,000 units in five years.

“We want to start with the smallest product,” Yu said. “When robotaxis really enter our daily lives, we may already have over a million self-driving delivery vehicles in use, and makers of those vehicles will be a key driver behind the autonomous-driving technology.”