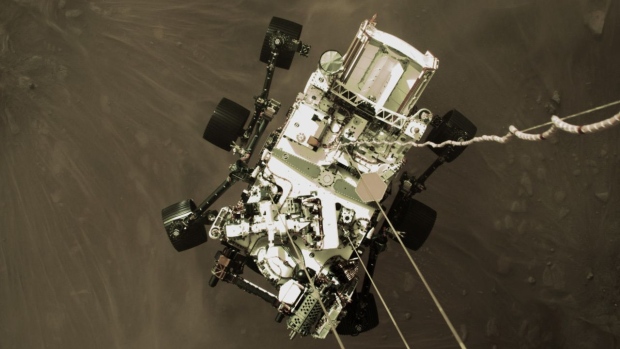 NASA’s Perseverance rover touches down on Mars on Feb. 18. A camera aboard the descent stage captured the moment. , Photographer: NASA-JPL/Bloomberg

(Bloomberg) -- The successful Mars landing of the rover Perseverance on Feb. 18 provides the U.S. with the chance to accomplish several firsts: a drone helicopter flight on another planet, access to an ancient river delta that may yield microbial fossils, and the most exciting feat of all for the Internet Age: high-definition video of touchdown on another planet.

That third one is now a reality, after the National Aeronautics and Space Administration released the stunning video Monday following a big social media buildup over the weekend.NASA Video: Perseverance Rover’s Descent and Touchdown on Mars

The so-called “seven minutes of terror” from the top of Mars’ atmosphere to the surface is a perilous flight at best—with extreme heat, crushing gravitational forces caused by extreme deceleration from 12,000 mph and a complex series of maneuvers that had to go just right for the 2,200-pound rover to settle onto the red planet at a gentle 1.8 mph.

The craft had traveled more than 292 million miles since its July 30 launch from Cape Canaveral, Florida. In the past, the final descent was purely the domain of computer graphics and animation. For Perseverance, however, the agency stowed upward-facing, high-definition video cameras and a microphone to record this most dangerous phase of the journey, both for the engineering insight and the enormous public interest in witnessing video of a Mars touchdown.

On Friday, NASA released a still image of the rover being lowered on its rocket-powered “sky crane”—another first for the U.S. space agency. But now there’s video: The film was made with six “ruggedized” commercial cameras, one of which failed when an onboard mortar fired to deploy the parachute. NASA collected 23,000 images during the entry, descent and landing phase and 30GB of data.