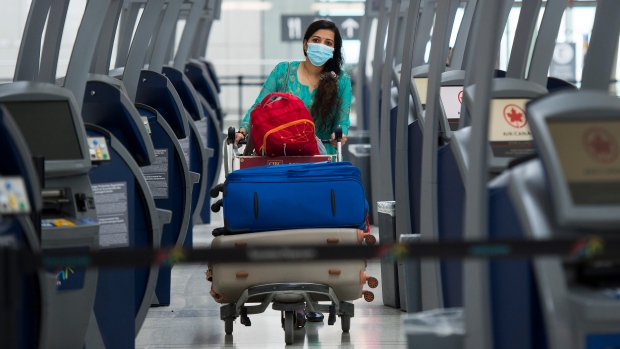 Passenger protection rules may need to be revised after hundreds of thousands of flight cancellations prompted by the COVID-19 pandemic left travellers out of pocket, the head of Canada's transportation regulator said Wednesday.

Scott Streiner, who heads the Canadian Transportation Agency (CTA), said officials should ask "the obvious question" of why airlines do not have to refund passengers when flights are cancelled for reasons beyond the carrier's control — such as a global virus outbreak.

"The situation that we've encountered over the past several months was unprecedented, it was completely unanticipated," Streiner said in a phone interview.

"And as a result of it we may need to collectively take a look at the framework that we've put in place for air passenger protection and ask ourselves whether there are lessons learned and whether there are any gaps that we need to address."

A new passenger rights charter, which fully came into effect on Dec. 15, requires airlines to ensure that customers can complete their itineraries, but does not demand reimbursement.

"I think the question we now have to ask is, what happens if that's not possible?" Streiner said, referring to completion of itineraries.

Most Canadian airlines have offered credits for a cancelled flight that are valid for at least two years and have kept billions in advance ticket sales amid a collapse of the travel industry.

Advocates say passengers have the right to a refund for services that were never rendered, with some in urgent need of cash amid a recession that pushed the unemployment rate to nearly 14 per cent, the highest rate in at least 45 years.

"The law has always been clear that passengers are owed a refund," said passenger rights advocate Gabor Lukacs, citing four CTA rulings. "The deficiency is in the failure to codify this obligation in the new regulations."

The absence of a refund rule forms part of a larger problem of enforcement in the Air Passenger Protection Regulations, he said.

A February 2019 report by Air Passenger Rights, an advocacy group run by Lukacs, found that criteria for monetary compensation are extremely tough to meet, often requiring passengers to present evidence that is in the hands of the airline.

Since February, passengers have filed a handful of proposed class-action lawsuits claiming airlines have unfairly denied customer refunds. A trio of petitions — two presented in the House of Commons last month — that garnered more than 109,000 signatures have called for customer reimbursement of flights cancelled due to the coronavirus.

The CTA has received a "tsunami of complaints" about airlines in recent months, with more than 93 per cent filed since mid-December, though many came in before the pandemic struck, Streiner said.

The watchdog will receive additional funding and hire 34 new staff to its current team of 50 dealing with air travel complaints, he said. The agency has also streamlined its complaints process, introducing a more user-friendly complaint form online along with increased automation.

"We're not going to be able to get through 14,000, 15,000 complaints in two months, but we are going to throw ourselves into it and we are going to dig through them as quickly as we can," Streiner said.

The CTA had suspended adjudications on air travel complaints to allow airlines to concentrate their resources on a pandemic response, but hearings will resume officially in early July, he confirmed.

Streiner said customers are entitled to refunds where stipulated in the contract of carriage or "tariff" but identified "ambiguity" in the contracts as an issue.

Multiple airlines have cited statements from the regulator in March and April to justify offers of credit rather than cash back.

"A lot of this has been following guidance of the CTA, where they had come down and said that it was acceptable to issue a travel credit during the time of pandemic," Swoop president Charles Duncan said in an interview.