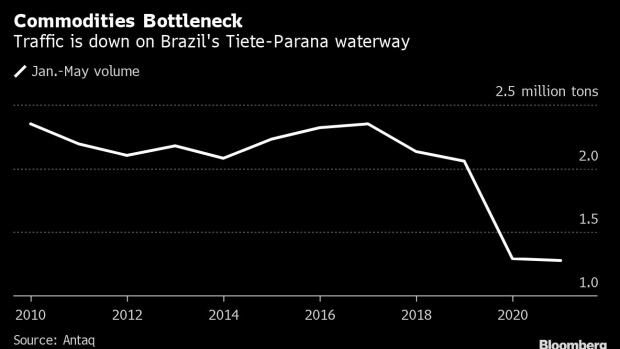 (Bloomberg) -- Drought is making one of Brazil’s most important river systems unnavigable, making it more challenging and costly for the commodities powerhouse to get grains and iron ore out to global markets.

The Parana River Basin in central Brazil is experiencing its worst water crisis in 91 years, according to the national grid operator, with June flows at 55% of the historical average for the month to sink to the lowest on record. South America’s second-largest river system provides electricity and water to Brazil’s industrialized south and supports river levels in neighboring countries, where drought has also made navigation difficult.

The consequences of Brazil’s water woes stretch well beyond the borders of this Latin American nation, with receding waterways causing supply-chain disruptions and bottlenecks in Argentina, the world’s largest soy-meal shipper, and Paraguay. Brazil is the top exporter of soybeans, coffee and sugar and the second biggest supplier of corn and iron ore.

The Tiete-Parana sub basin, which transports grains and oilseeds from Brazil’s top crop belt to export terminals, is close to halting operations for the first time since the last severe drought in 2014, Luizio Rizzo Rocha, vice president of the National Federation of Waterway Navigation Companies, said in an interview. Water levels in a key stretch of the waterway known as Avanhandava have slipped just below the minimum required for navigation, he said in an interview.

Below-average rainfall has created bottlenecks for the second year in a row at the Paraguay-Parana waterway, which is used by iron-ore giant Vale SA as a cheaper transport alternative to roads and rail. Shipments are at the lowest since Brazil’s waterway transportation agency, known as Antaq, began collecting data in 2010.

“The Paraguay-Parana waterway is also at risk of a navigation halt,” said Jose Renato Ribas Fialho, Antaq’s superintendent of performance, development and sustainability. “Barges are already carrying at lower capacity than a year ago, increasing transport time and costs.”

Mining trucks are overloading the main highway in the region and accidents are frequent, according to Jesse do Carmo, president of a local miner workers union.

Vale said it is using low draft vessels on the river, and is also transporting ore by road and rail in a safe and legal way to reach clients in Brazil and abroad.

The Madeira River in the southern part of the Amazon region is also drying out earlier than usual. The waterway is used to transport grains and oilseeds. Transportes Bertolini, a top logistics company operating on the Madeira, plans to reduce cargoes a month earlier than last year’s dry season, company chairman Irani Bertolini said in phone interview.

“The situation will be very critical in the peak of dry season, when we expect out barges to only be at half capacity,” he said.