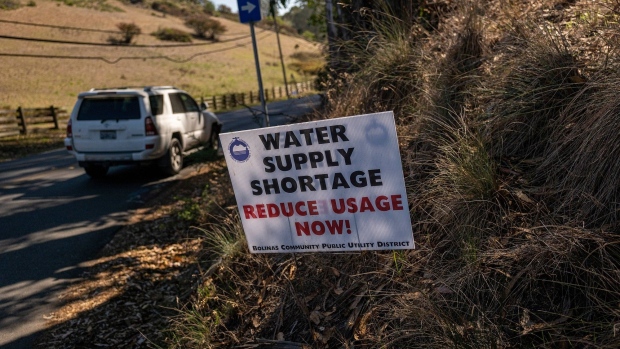 A 'Water Supply Shortage, Reduce Usage Now!" sign in Bolinas, California, U.S., on Thursday, Oct. 14, 2021. The current California drought poses an existential threat to places like Marin County, which rely on local water sources for most or all of their supply. The past year has been the second driest on record in California. Photographer: David Paul Morris/Bloomberg , Bloomberg

That’s the guilt-free promise of a recirculating shower, which continuously filters, sterilizes and reuses water that would otherwise go down the bathroom drain. The technology reduces water consumption up to 90% and energy use by 80% compared to a conventional shower, according to manufacturers of the devices.

“We are addressing two of the problems the world is facing, climate change and water shortages, without sacrificing the shower experience,” said Troels Grene, chief executive officer of Flow Loop, a Danish company that has developed a recirculating shower called the Eco Loop.

Flow Loop is one of several startups bringing the technology to market in northern Europe, with plans to expand to drought-prone regions of the United States and other countries in coming years.

The high-tech showers, which sell for between $4,000 and $6,000, are part of a trend to make buildings more sustainable and resilient to climate change. Much as solar panels and battery storage have transformed homes into power stations, recirculating showers, greywater systems and rainwater tanks turn dwellings into water treatment and recycling plants.

A 2019 study found that regions across the U.S. could face water shortages in the decades ahead due in part to climate-driven droughts. Showers account for about 17% of the nation’s household water consumption, according to the U.S. Environmental Protection Agency. Heating water consumes about 18% of energy in single-family homes on average and 32% in apartment buildings with five or more units.

Industrial designer Mehrdad Mahdjoubi founded Swedish recirculating shower startup Orbital Systems in 2012 after a collaboration with NASA to devise a sustainable water supply for a Mars mission. That opened his eyes to the unsustainability of water consumption on Earth.

“We have been flushing toilets with drinking water and using 25 gallons to take a shower, and I was blown away that nothing had been done about that,” said Mahdjoubi.

If Apple Inc. made a shower, it might look something like the Orbital. The most expensive $6,000 model features a sleek panel that sits flush with the shower wall. An illuminated touchscreen dial controls shower temperature and tracks water and energy consumption. The water purification system, a pump, a heater, and other electronics are hidden behind the panel.

When water from the large shower head flows down the drain, sensors analyze its quality 20 times a second. Water too contaminated to be reused is flushed away. The rest is diverted to a filter to remove impurities, then sterilized with UV light. A heater replaces any lost warmth before the water returns to the shower head in a continual loop. Real-time data on water and energy use is beamed to the cloud, where it can be accessed on a smartphone.

Less expensive models from Orbital place the control box outside the shower.

Mahdjoubi said the company has sold more than 1,000 showers so far and has more than 10,000 on order, noting that about 85% of sales are for renovations of bathrooms in homes, hotels and other businesses. Growth has been hindered, he said, by plumbers and builders’ resistance to the new technology.

“It’s been hard to ramp up the volume of installers,” said Mahdjoubi. “We need to invest in training installers and building relationships. It takes some time.” He said Orbital is using the technology to develop other water-saving applications for the home.

Grene said his company’s $4,000 Eco Loop shower, which is scheduled to hit the market in the second quarter of this year, is designed to be “plug and play.”  The technology was developed with the support of IKEA.

“We’ve focused on making a system that can be installed in existing bathrooms without retrofitting,” he said.

The shower resembles a thin monolith. Water is collected from the shower floor rather than the drain to be circulated through the purification system.

Hamwells, a startup based in the Netherlands, makes a similar monolithic recirculating shower called the HomeSpa that can be installed in an existing bathroom. The shower sits on a base that drains water for purification and reuse.

Jay Lund, a professor of civil and environmental engineering at the University of California at Davis and an expert on urban water conservation, said municipal health departments could prove an obstacle to recirculating showers in the U.S.

“I would expect local public health authorities to be skeptical of these kinds of things as in some cases they might be concerned about opportunities for different kinds of pathogens to exist in the recycled water system if a unit wasn’t working properly,” he said.

Flow Loop says its UV treatment eliminates 99.99% of pathogens, while Orbital says its purification system results in “even cleaner water than the one from your tap.”

Lund also noted that in many areas of California, shower water isn’t necessarily wasted as it is collected by treatment plants and recycled for landscape irrigation and discharged into streams for environmental purposes.

Still, he said, the four-figure showers may prove attractive in places like Marin County, Calif., that are dependent on local sources of water. Amid a record-breaking drought last year, officials in the affluent enclave north of San Francisco asked residents to cut consumption 40% as reservoirs dried up and the county risked running out of water.