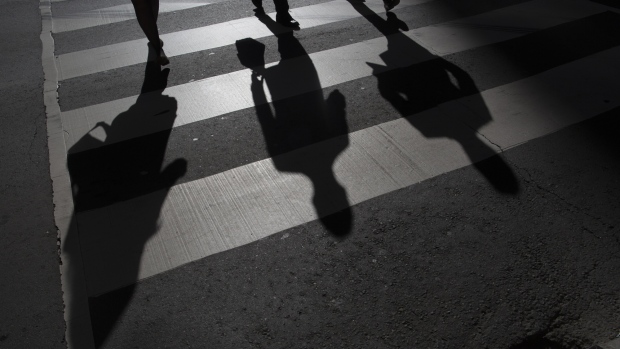 The shadow of pedestrians are seen on the ground of a crosswalk in Toronto, Ontario, Canada. , Bloomberg

A Canadian investment firm that crushed the returns of its peers last year is looking to raise $500 million for what would be one of the country’s largest hedge funds.

Waypoint Investment Partners generated a 6.2 per cent return in its segregated accounts in 2018 by investing in companies that pay fat dividends, then using those payouts to buy options to bet on market volatility. That compared with a 1.6 per cent loss for Bank of Nova Scotia’s Canadian Hedge Fund Index in the 12 months through November, and an almost 12 per cent decline in the S&P/TSX Composite Index for 2018.

Now Toronto-based Waypoint is planning to put that strategy to work in a new pooled hedge fund. The Waypoint All-Weather Portfolio will be run by Ryan Marr, who managed the segregated funds last year. Marr, 32, joined Waypoint a year ago after 12 years with Gluskin Sheff & Associates Inc. as partner and portfolio manager.

“Volatility is extremely cheap as an asset class in Canada,” Marr said in an interview. “The dividend yields minus the costs of options are positive, which provides the perfect offset.”

Waypoint was formed in 2014 to invest for partners and their families. It began accepting money from high net worth individuals and family offices last February, reaching $65 million under management. The company has 12 employees, five of which are partners, and is looking to hire one or two analysts this year as the new fund grows.

The fund will target Canadian-listed companies yielding five to six per cent, most of which are not found in common indexes and not well covered by analysts. Waypoint will go long volatility through both individual securities and index options with two to six month rolling duration.

Marr sees upside to his price target of $10 per share for Canada’s Chorus Aviation Inc. as the regional carrier likely takes market share from competitors. His bet took a big leap forward on Monday after Chorus surged 15 per cent to $7.24, the biggest gain since 2013. The move came after the Halifax-based company secured a 10-year partnership for its Jazz brand with Air Canada, along with an almost $100 million equity infusion.

Another big bet is shares of Markham, Ontario-based Sienna Senior Living Inc., which owns and operates senior-care and retirement facilities in its home province and British Columbia.

“Demand for this asset class will rise,” Marr said. “There will be one million citizens in Canada who will need this service as they enter the later years of retirement and there only 432,000 beds today,” he said.

The hedge fund prefers companies in which management or founders hold high stakes, avoiding the energy and materials sectors. The partners also invest most of their wealth in the firm’s strategies, paying the same 1 per cent management fee, with an additional charge of 10 percent of the profit above 10 per cent, as clients do.

The Alternative Investment Management Association of Canada said 58 per cent the country’s hedge funds have less than US$100 million under management, with the median size US$41 million.