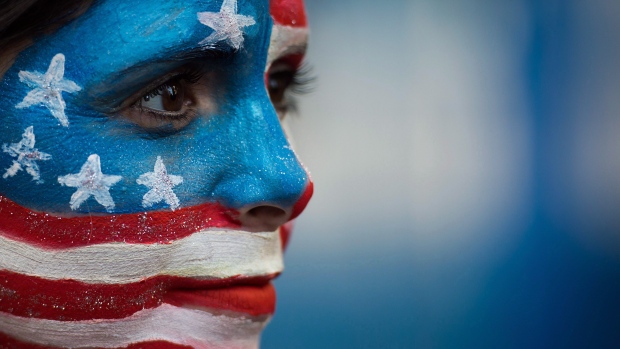 With her face painted with the U.S. flag, Brittany Boutilier, of Halifax, N.S., attends a protest against Donald Trump outside the still under construction Trump International Hotel and Tower, during demonstration to encourage U.S. expats across Canada to register and vote, in Vancouver, B.C., on Wednesday October 5, 2016. , The Canadian Press/Darryl Dyck

WASHINGTON - When an unpredictable nationalist gets elected to lead the globe's biggest superpower, the political shockwaves from the ground-shaking event will inevitably be felt by the next-door neighbour.

The particularly abrupt plunge of the Mexican peso signalled expectations that the southern neighbour might feel the most effects. The loonie fluctuated too. Trump's ascendancy to the White House could affect Canada in multiple ways.

Trump has repeatedly demanded a renegotiation of NAFTA -- or he says he'll cancel it. That's sure to cause jitters to the north, given that Canada sends three-quarters of its exports south. But Canada is willing to have the conversation.

"I think any agreement can be improved," said David MacNaughton, the country's ambassador to Washington. "If they want to have a discussion about improving NAFTA, then we're ready to come to the table."

He cited one example of something he'd like to see added to the deal -- softwood lumber, a perennial trade irritant.

Trump has the power to scrap NAFTA, but several observers played down the drama due to mitigating factors, including the possible requirement of Congress in re-establishing tariffs, as well as the Canada-U.S. agreement that predated NAFTA.

If Trump does scrap NAFTA, Dawson said, industry groups that remained silent during the election would suddenly start roaring: "All of those folks are going to be lined up saying, 'Are you kidding me? Do you know how much of our livelihood is dependent on open borders and trade between these three countries?"'

A Canadian pipeline company already says it's hoping to chat with the administration. Trump has said he favours construction of the Keystone XL pipeline, killed by President Barack Obama.

His campaign literature suggested he'd invite TransCanada Corp. to reapply for a permit. Then again, he's made difficult-to-decipher comments about demanding a larger share of the profits for the U.S.; American companies and local governments always stood to profit from it.

If he's serious about proceeding, it could be a bit of welcome news for the Canadian government. Prime Minister Justin Trudeau had supported the pipeline, and now faces political dilemmas at home related to new pipelines.

Trudeau differs dramatically with Trump here. Trudeau went to the airport to welcome refugees from Syria. Trump refers to them as a Trojan horse. His son even tweeted a comparison to a bowl of Skittles, where only one bad one can kill you.

This issue could be connected to national security, and therefore potentially the border. Thinning the border to facilitate trade is a huge priority for Canada. It's far from certain a Trump administration would be keen on more refugees next door.

This is in sharp contrast with the Democrats, who wanted to be more welcoming. The current administration even looked to emulate Canada's system for privately sponsoring refugees -- another U.S. project potentially in limbo.

The Citizenship and Immigration Canada website was groaning under the weight of heavy traffic Tuesday night. Even before the election, CNBC reported that the number of Americans searching for jobs in Canada had increased a whopping 58 per cent since last year on the jobs-posting platform Monster Worldwide.

The Canadian government did little Tuesday to dispel the idea that it welcomes a northbound brain-drain, tweeting the following message (it had been previously scheduled, a spokesperson said) as election results rolled in: "In Canada, immigrants are encouraged to bring their cultural traditions with them and share them with their fellow citizens."

Young, college-educated Americans like those who populate Silicon Valley are among the most hostile to Trump. The federal government has been working to rebrand Canada as more than a resource producer, but also a player in the digital economy.

Will Canada go poaching for brains, as well as investors?

Spending levels could become an irritant. Trump has threatened to leave allies to their own devices if they fail to meet the agreed-upon NATO target of spending two per cent of GDP on the military. Canada is nowhere close and recently said it had no current intention to get there.

Here's what Trump says about NATO allies: "The countries we are defending must pay for the cost of this defense, and if not, the U.S. must be prepared to let these countries defend themselves."

Trudeau's affection for the current president was obvious during their meetings. He'll soon face a less-predictable interlocutor.

Trudeau bit his tongue, mostly, during the campaign but did make clear his displeasure with Trump's talk of a Muslim ban. Trudeau dedicated his first United Nations General Assembly speech to the danger of nationalist populism.

Members of his government expressed concern, privately, about a Trump win.

Now they'll be dealing with a president whose election drew a celebratory tweet from France's National Front. Also, a president whose default stance on trade irritants during the campaign was to vow punishment of trading partners.

It's unclear how Trudeau will handle a counterpart with whom he disagrees more often; whom Canadians like less; and whom he might struggle to read. Complicating matters, the Trudeau team has far fewer connections with Trump's rag-tag campaign outfit, which frequently underwent staff overhauls and relied heavily on political rookies.