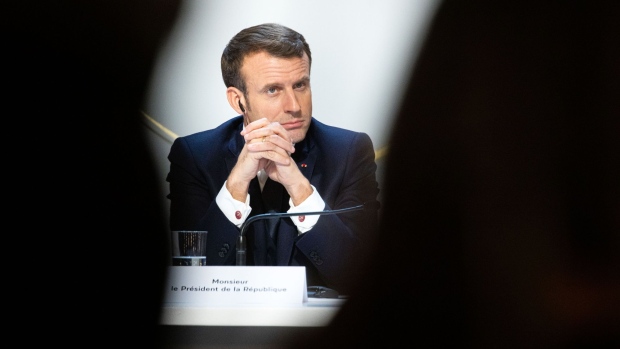 European leaders attempted to prepare their electorates for the unprecedented trials ahead as comprehensive curbs on national life came into force in a bid to control the spread of the deadly coronavirus.

In a series of public addresses, the leaders of countries from Finland to Germany sought to convince populations of the need for restrictions on their daily lives ranging from school and workplace closures to the shuttering of non-essential shops and services. Italy, which has been labouring under similar limitations for more than a week now, showed the reason for such measures as it announced that the number of COVID-19 cases had reached almost 28,000.

“We are at war,” President Emmanuel Macron said in an address to the French people on Monday evening, making the case for national unity in the face of shared sacrifice. Hotels and taxis will be requisitioned for health workers, all proposed reforms, including his controversial pension overhaul, are to be halted, while the government will ensure that no business is allowed to fail. Bank loans will be guaranteed for companies and a solidarity fund created for workers affected by the fallout of the virus containment.

In the social sphere, Macron announced a ban on all meetings in public spaces, calling for “solidarity and responsibility” after people had been seen congregating in parks, restaurants and bars, posing a risk to themselves and to others. Only necessary trips outside such as for grocery shopping or for physical exercise will be allowed, with sanctions on those who don’t adhere to the rules, he said.

“The crisis will have major human, social, economic consequences,” and France “will need to adapt,” Macron said. “One thing is certain: the more we work together, and fast, the better we will overcome this challenge.”

Macron spoke at the end of a day when the lockdown that began in Italy extended to most of the rest of the continent. Governments imposed a series of measures constricting Europe’s way of life that have been unseen in 75 years of peace time, reflecting the continent’s status as the new epicenter of the virus that first ravaged Asia. European Union leaders will hold a video conference Tuesday to discuss the coronavirus crisis.

The EU’s leaders, Ursula von der Leyen and Charles Michel, earlier proposed halting non-essential travel to the bloc for 30 days. Von der Leyen informed leaders of the Group of Seven leading industrial economies about the ban during a conference call Monday. The restrictions, which are subject to approval by EU leaders, can be prolonged “as necessary” after the initial 30-day period, she said on Twitter.

Germany’s federal government agreed guidance with the country’s 16 states that will see public life grind to a halt in Europe’s biggest economy. Closures include bars, clubs, theaters, cinemas, museums, trade fairs, gyms and swimming pools – even brothels. Shops and services such as supermarkets, delivery services, banks and post offices are excluded. Gatherings in churches, mosques and synagogues will be stopped. Restaurants may stay open from 6am to 6pm; overnight stays for tourism will be halted.

“These are measures that we’ve never before seen in this country, and of course they’re drastic,” Chancellor Angela Merkel said at a news conference in Berlin on Monday evening. “But they are necessary right now to reduce the number of contacts.”

Portugal and Spain announced that they would close their shared border and suspend all air and rail links to tourists. It remains open for the transport of goods.

Finland began preparations to invoke emergency powers for the first time in peace time, allowing the government to close borders, schools and universities, and limit public gatherings to 10 people. It also unveiled 5 billion euros (US$5.6 billion) worth of measures to help the economy.

The Greek government announced that all shops will be closed from Wednesday except for essential services. COVID-19 cases in the Mediterranean island of Cyprus meanwhile rose to 46.

In Switzerland, the government declared a national emergency and closed restaurants, fitness clubs and other public establishments. Speaking in Bern, President Simonetta Sommaruga said that travel from immediate neighbors Germany, France and Austria will also be limited to people commuting for work or who live in Switzerland, a rule already enacted for Italy.

In the Netherlands, Prime Minister Mark Rutte delivered the first address by a Dutch premier on a major challenge to face the country since 1973 during the energy crisis. The Netherlands is adopting a stance similar to the U.K. by avoiding a total lockdown, drawing criticism for late closing of schools to prevent the spread.

Rutte said that it will take more than a year for the virus to run its course through the population and the economic consequences of complete isolation would be too great, affecting companies from small enterprise to national icons like KLM.

“The task we face is very large,” Rutte said. The reality is that the coronavirus “will be among us for some time.”