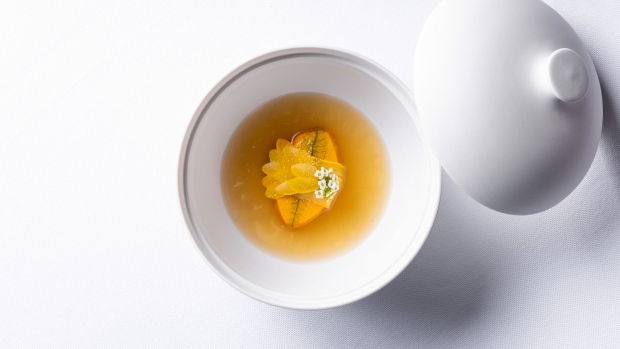 (Bloomberg) -- The refrigerated cases in Eleven Madison Park kitchens are once again fully stocked. This time, instead of flocks of hanging ducks, there are rows of ceramic pots, each filled with aging beets, with leafy green tops sticking out. You could be in a florist shop.

But you are not. You are in one of the most famous restaurants in the world, and there’s a waiting list of 15,000 to watch those pots get broken tableside, before the beets are carved up, wrapped in mustard leaf kimchi, and served with red wine jus. The beets, which have been dehydrated, then rehydrated, smoked, cured, and otherwise alchemized over the course of three days, have a remarkably chewy, almost meaty texture. Their dirty sweetness is transformed into a rich, roasted masterpiece of a dish, the excitement of which wafts alongside the charred aromas as the pots are wheeled throughout the dining room.

After weeks of frenzy surrounding chef-owner Daniel Humm’s vegan reimagining of one of the world’s most revered menus, the doors opened on June 10.

If there is one dish that represents the precision, nuance, and, especially the labor-intensiveness of the new menu, it’s the unassuming cucumber course that appears about 1 ½ hours into the meal. It looks like any old fish tartare. But it consists of minutely chopped, compressed cucumbers layered in a gradient with equally tiny bites of sweet, crisp melon over a base of avocado cream—all punctuated  with threads of silky, smoky daikon. Powdered cucumber skin is sprinkled on top. It takes two cooks all day, every day to chop and prep, due to the short shelf life of the fresh cucumber.

In fact, time is the ingredient on full display throughout the menu, thanks to 35 to 40 hardworking chefs in the kitchen.

The lack of protein does not sing out, perhaps because almost nothing on the 11-course EMP menu attempts to mimic meat or fish. There’s no lavender-roasted seitan to evoke the famed duck, which would have been an easier, less eye-opening shortcut.

The exception is the caviar-styled tonburi, served on a bed of ice in a silver tureen with little mother of pearl spoons. Humm cooks the tonburi—seeds from the Japanese Kochia tree—with seaweed to add umami and salinity, then serves it with lettuce decorated with red sorrel leaves. Pea and miso puree, enriched with almond and lemon cream for dolloping on the “caviar,” took it over the top.

Making the lettuce wraps yourself adds to the sense of food theater, as one of the menu’s many welcome interactive moments. In another, a fried sweet pepper that evokes a jalapeño popper comes with four pepper-based condiments that showcase the vegetable’s range.

The single best dish on the menu, though, is not even an official course. When we dig into the sunflower bread, we aren’t embarrassed to ask for seconds. (Which are happily supplied.) Pastry chef Laura Cronin conjures chickpeas into baked goods with the buttery flakiness of ones made with animal products. The fragrant, crispy textured laminated rolls come with more nut butter on the side, molded into a dramatic Art Deco flower that’s topped with a black miso glaze.

Chatting tableside as he works the dining room on opening night, Humm admits that “once we got the bread and butter, we knew everything would be OK” with a full vegan menu. Actress Angelina Jolie, Chipotle founder Steve Ells, and the other industry heavyweights and click-lucky foodie civilians who were there to energize the venue seemed to agree.

For all the brave new world talk about the menu, some dishes provoke a powerful sense of déjà vu.

A refreshing dish of celtuce, or Chinese lettuce, with rice porridge has been on the menu before. The celery-like vegetable was formerly prepared with dairy butter; now the kitchen uses more of the sunflower butter to enrich the broken rice.

Humm has also repurposed the final entree: half an eggplant is roasted to be incredibly sweet and caramelized, with tomato and glazed radishes. It was previously flavored with bonito, the smoked tuna flakes now banished from the kitchen. Humm has played with the amounts of mushrooms to add an underlying earthiness.

It’s tremendously satisfying, perhaps more so when you learn that a chef spends two days preparing it, including making cuts with a razor blade. Alongside is a pile of crisp beans on a cocoa bean puree and a bowl of sliced summer corn kernels that have an almost cheesy bite, thanks to the addition of fermented almond cream, mixed with grits. Much of the deeper umami flavors come from probiotic cultures (e.g., a bacteria you’d add to dairy to turn it to yogurt or cheese) sourced from Brooklyn’s Kingdom Supercultures.

Everything may be plant-based at the new EMP, but nobody is going hungry. We left our five-hour meal (most clock in at least four, once you count a visit to the kitchen) feeling like two ripe-to-bursting watermelons. It’s hard to imagine that anyone will go off in search of a Shake Shack burger across the street when they’re done.

Now that Humm’s ingredient list is focused on objects less pricey than imported langoustines and dry-aged veal, he calls time the new definition of luxury. “A piece of kobe beef is expensive but not rare. A 100-year-old fermented sauce is rare,” said Humm in a June 9 interview.

In preparation for the menu’s debut, two shojin chefs spent three months at the restaurant. The plant-based cuisine, which dates back to 7th century monasteries in Kyoto, is focused on rituals around cooking vegetables.

Among the new prep duties introduced by the shojin experts is grinding sesame seeds. The pressed sesame makes up the base of marinated then grilled tofu that’s layered with three different squash pickles and two kinds of squash ribbons. A paste of toasted seeds flavors the chocolate pretzels served at the end of the meal on a rack; these are another of the meal’s highlights, along with the bottle of homemade apricot vermouth poured gratis.

The process of grinding the seeds takes about an hour each morning. The shojin method requires the cook to be seated on the floor, pressing in a counter clockwise motion. “You’re sitting on your knees for an hour. You’re in pain, but it slows you down,” says Humm.

One of the shojin chefs, Toshio Tanahashi, suggested that Humm have Eleven Madison Park’s guests grind seeds themselves. Humm laughs: “He also suggested that guests shouldn’t use silverware. We didn’t consider that.”

Also with a view toward guest comfort, Humm is allowing cow milk for cappuccino and honey for tea, the only non-vegan ingredients in the kitchen. Even family meal—the food served to restaurant staff before service commences—is plant-based.

“We’re not the food police,” he says. Still, the chef doesn’t know what the restaurant will do if someone asks permission to bring animal-based butter. “Probably not,” he finally says. (The restaurant has confirmed that it will continue to have a resident “dreamweaver” to respond to guests’ unconventional demands and provide moments of delight, such as doling out White Claws to two celebrants; a custom sticker placed over the label reads: “Ain’t no foie, but Claw is still the law.”)

A six-course, $175 version of the full menu is on offer at the bar. Like the dining room, the bar is sold-out through July. A few walk-in seats are available each night. For the main dining room, the cost is $730 for two people, including tax and tip, before you even order a drink. Wine pairings start at $175 per person, and speciality cocktails range from $22 to $27.

Eleven Madison Park’s cocktail list dispenses with seasonality and, like the menu, focuses each drink on one key fruit or vegetable flavor. There’s a Sugar Snap Pea vodka tonic, a Melon sherry sour, and a Tomato margarita.

The wine list has stayed the same, despite the menu’s monumental changes. Heavy hitting bottles such as a 2014 Alain Graillot Crozes Hermitage that paired well with meaty duck are now being pushed with the aged beets in red wine, which works surprisingly well. Wine director Watson Brown says the restaurant didn’t consider selling off the cellar and going in an all-organic or natural direction that might better reflect the new menu. “We always have, and will continue to champion delicious wines of all types,” he says.

As for the potential lack of revenue from sales of big-ticket Napa cabs that went better with protein-packed dishes, Humm is unconcerned. “It would be easier to do duck if this was about money.”

“A year ago, I didn’t know if there would be Eleven Madison Park,” Humm says, “I was laying off people and looking at bankruptcy.” Even two months ago, after he decided to pursue a vegan menu, “It wasn’t clear if guests would come. My team said: ‘Let’s do what we know.’ ” As everyone now knows well, reservations were snapped up in minutes.

For those who don’t get a seat in the dining room, Humm confirms that when the Eleven Madison Park meal kit reappears in the fall, there is no plan to include animal products.