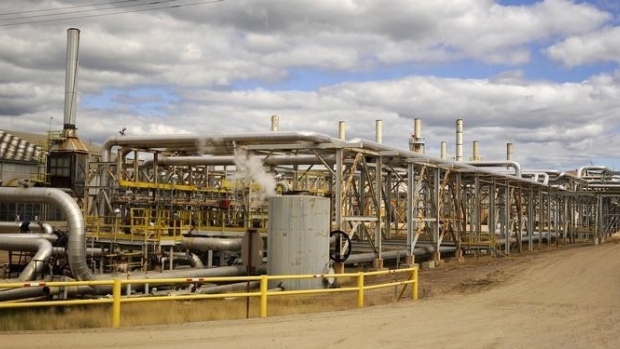 CALGARY — Canada's oil sands producers are stuck in a rut.

The nation's oil firms are retrenching, with large producers planning little or no further expansion and some smaller projects struggling even to cover their operating costs.

As the era of large new projects comes to a close, many mid-sized producers — those with fewer assets and producing less than 100,000 barrels of oil a day in the oil sands — have shelved expansion plans, unable to earn back the high startup costs with crude at around US$50 per barrel. Larger Canadian producers, meanwhile, focus on projects that in the past were associated with smaller names.

The last three years have seen dozens of new projects mothballed and expansions put on hold, meaning millions of barrels of crude from the world's third-largest reserves may never be extracted.

Where industry groups in 2014 expected Canada's oil sands output to more than double to nearly five million barrels per day (bpd) by 2030, that forecast has been knocked down to 3.7 million bpd.

This follows a spell of consolidation that has seen foreign majors sell off more than US$23 billion in Canadian assets in a year and turn to U.S. shale patches such as the Permian basin in Texas, which produce returns more quickly and where proximity to refiners means the barrels fetch a better price.

"We cannot compete with that huge sucking noise to the south that is called the Permian. Investment dollars are spiralling away down there," Derek Evans, chief executive of small oil sands producer Pengrowth Energy (PGF.TO) told Reuters in an interview.

Permian production rose 21 per cent in 12 months through July compared to a nine-per-cent increase in Alberta's oil sands, according to Canadian and U.S. government data.

Mid-sized producers are hurting the most, due to startup costs that far exceed those in other major producing areas. Oil sands producers have slashed operating costs by a third since 2014, but building a new thermal project — in which steam is pumped as deep as one kilometre (1094 yards) underground to liquefy tar-like bitumen and bring it to the surface — requires U.S. crude benchmark at around US$60 a barrel to break even, analysts estimate.

The North American benchmark West Texas Intermediate crude has traded between US$42 and US$55 a barrel so far this year. The U.S. Energy Information Administration forecasts it will average US$49.69 a barrel in 2017 and US$50.57 a barrel next year.

There are around half a dozen thermal projects in the costly startup phase, when engineers steadily increase steam pressure to bring a reservoir's production up to full capacity.

One of those is Athabasca Oil Corp's (ATH.TO) Hangingstone project. It was originally conceived as a 80,000 bpd project, but instead will bring output to only 12,000 bpd from the current 9,000 bpd. The project can break even with U.S. crude prices of at least US$53 a barrel, meaning right now Athabasca keeps losing money on Hangingstone production. Size is crucial in the oil sands; the more bitumen a company can squeeze out of a plant, the lower fixed costs per barrel will be.

"[Athabasca] was a company built when oil was [US]$100 a barrel. In those days we were going to find funding for joint ventures and build greenfield projects to a massive size. The reality is the world changed," chief executive Rob Broen told Reuters.

Quarterly filings show why smaller players are struggling. Transportation and marketing costs at Hangingstone, along with the cost of natural gas used to produce steam to extract oil, and other operating costs are much higher compared with Cenovus Energy's (CVE.TO) Christina Lake project, one of the highest-quality and biggest bitumen reservoirs in the oil sands.

Pengrowth's development plans are on hold as well, Evans said, because the company needs U.S. crude to stay at US$55 for a sustained period to justify investment in its 14,000 bpd Lindbergh thermal project, at one point intended to grow as large as 40,000 bpd.

Large producers have pulled back in response to lower global prices as well. For example, Suncor Energy's (SU.TO) 194,000 bpd Fort Hills mine, due to start producing oil by the end of this year, is the company's last megaproject.

Canadian Natural (CNQ.TO) restarted construction on its 40,000 bpd Kirby North project last November, one of a handful of smaller projects to start producing in 2019.

Other companies like MEG Energy (MEG.TO) are planning expansions at existing sites in 20,000 bpd "modules" rather than starting large new projects from scratch. But even such more modest investments are out of reach for smaller companies like Athabasca and Pengrowth.

"It's very hard [for a small company] to drag itself out of the financing black hole it would have to get in to build a project to start with," said Nick Lupick, an analyst at AltaCorp Capital. "A large company can take that on their balance sheet without having to leverage too highly."