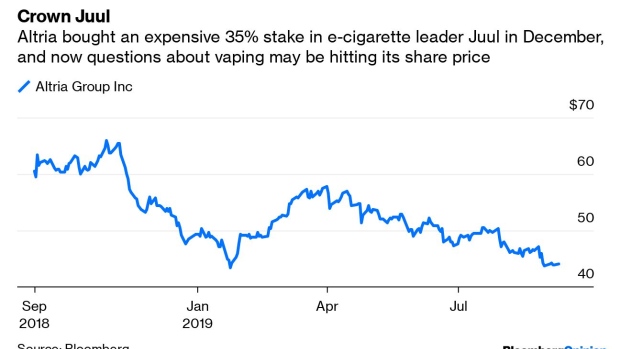 (Bloomberg Opinion) -- “At least it’s better than smoking” was a common mantra when it came to vaping devices. Not anymore.

Doctors in more than 30 states have seen hundreds of patients turn up with severe and mysterious lung illnesses this year as the popularity of vaping explodes. As many as six people have died. We’re scrambling to figure out what's putting otherwise healthy young people on ventilators and how to respond because states and the federal government have only just started to regulate these products.

On Wednesday, Health and Human Services Secretary Alex Azar said the Food and Drug Administration is moving to ban flavored vaping products from the market that particularly appeal to young people, with President Donald Trump himself calling vaping a “problem.” While the acknowledgment and promise of action are positive, there’s a lot more that needs to be done to ensure the latest crisis doesn’t become an even bigger public-health issue.

The FDA gained oversight over e-cigarettes in 2016, and under an initial timeline, manufacturers were set to have to apply for agency approval starting in 2018. The FDA still isn't reviewing vaping products because the Trump administration pushed the key application deadline back. We can already see the damage from the agency's lack of urgency. Meanwhile, marijuana products, which appear to play an outsize role in this health crisis, aren’t regulated at the federal level.

Lawmakers and advocates are responding to the rash of vaping-related illnesses by calling for greater restriction of nicotine e-cigarettes (Bloomberg Philanthropies – the charitable organization formed by Michael Bloomberg, founder and majority owner of Bloomberg News owner Bloomberg LP – announced an initiative this week with Campaign for Tobacco-Free Kids to increase awareness about the potential dangers of vaping and push for a ban on flavored e-cigarettes). The companies that make e-cigarettes would prefer to focus on cannabis and bootleg products sold outside of stores. Given the large gaps in our knowledge of vaping’s impact and the fact that people are dying, we need an aggressive “all of the above” approach.

The defining characteristic of this emerging crisis is uncertainty. A review of 53 recent cases in Wisconsin and Illinois published Friday in the New England Journal of Medicine found that 94% of the group of mostly young and healthy individuals were hospitalized, and 32% required ventilators.

Most of those patients – 84% of those surveyed – reported vaping THC, the main psychoactive ingredient in marijuana. A couple of bootleg cannabis brands have popped up multiple times. However, there have been plenty of cases where patients report vaping nicotine as well, and smaller groups report using nicotine products alone. Physicians and regulators are suggesting that everything from the inhalation of metal vapors to vitamin E acetate might be to blame, but nothing can account for all of the illnesses so far.

The little we do know isn’t encouraging. E-cigarette fluids have been found to contain at least six groups of potentially toxic chemicals. We have no idea what happens when THC is added, or when these substances are heated together and inhaled daily for months or years. There was early evidence of potential heart issues before this current crisis, and the FDA is also looking into reports that vaping may cause seizures. The supposedly countervailing evidence that these products help people avoid combustible cigarettes is limited. The fact that they’ve introduced a whole new generation of young people to a highly addictive and possibly dangerous habit is indisputable.

Discovering specific tainted products that might be contributing to these illnesses should be a priority, but regulators can’t stop there. A complete response has to tackle four big issues.

First, the FDA needs to accelerate its efforts to scientifically review legally available products, with an added emphasis on safety. A ban on flavored products will help curb the teen vaping epidemic, but stricter age restrictions and a more aggressive clampdown on deceptive marketing should follow. Then there’s the black market: The devices people are buying on the street and the liquids used in them demand more attention. Finally, this crisis makes it even more clear that marijuana products shouldn’t continue to exist in confusing regulatory limbo.

It’s an imposing wish list. But the inevitable consequence of leaving things as they are is more illnesses and deaths.