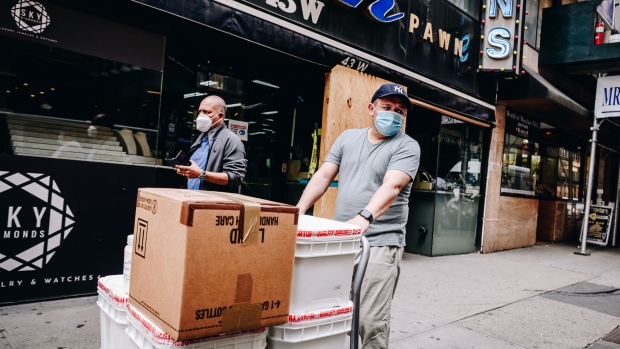 A worker wearing a protective mask pushes a cart in the Diamond District of New York, U.S., on Wednesday, June 10, 2020. New York streets got a little more congested this week as the city entered Phase 1 of its re-opening from the coronavirus-imposed lockdown. Photographer: Nina Westervelt/Bloomberg , Bloomberg

The technology already exists to detect most new cases of the novel coronavirus in the United States. And it’s not even that expensive.

While the country was locked down, scientists developed a number of fast, easy test kits that could flag infections in homes, offices or medical centers. Others have devised wearable devices that can monitor the subtle changes in heartbeat that occur before people show symptoms.

Holding all this back are fears about privacy, inappropriate regulation and a defeatist attitude about testing and contact tracing.

Americans seem wedded to the belief that an overwhelming number of cases are caught by passing strangers on the sidewalk or in the supermarket, despite growing evidence they come primarily from close contacts, which can be traced, or crowds, which can be avoided.

The recent kerfuffle over a WHO statement on “asymptomatic” carriers highlights the level of emotion driving the discussion. Maria Van Kerkhove, the WHO director of infectious diseases, first said that cases in which totally asymptomatic people transmit the disease are rare. She later amended that, saying such asymptomatic cases are not well understood.

That’s true, but in the end, her valid message was lost, which was that there’s evidence that the primary driver of the disease appears to be people who do get sick; that they can spread the disease before they get sick; and that fatalities can be prevented by finding people with symptoms, tracking down their recent contacts, and isolating those who test positive.

Strategic combinations of routine testing and contact tracing have helped many countries — from Iceland to Germany to South Korea — avoid the heavy death tolls suffered in the U.S.

Meanwhile, the U.S. has plodded along with increased testing capacity but little strategy.

This week, the Boston Globe reported that there were three times as many tests as test takers in Massachusetts, since cases are down and tests are still widely believed to be reserved for only people with serious illness.

What we really need now is surveillance — an ugly word to American ears, but in the public health context it should be thought of as spying on the virus, not on people.

While some surveillance can be done with excess existing tests, we would do even better to deploy faster, cheaper, easier tests. MIT professor and biotech founder Lee Gehrke and colleague Irene Bosch have developed one of those testing technologies — a so-called antigen test, which can pick up an active infection using a test strip, like a pregnancy test.

These researchers developed similar tests to scope out Zika and dengue infections. In contrast to the standard COVID-19 test — known as PCR — antigen tests can be read with no special equipment or expensive materials.

One reason these aren’t yet widely deployed is that regulators at the FDA are too focused on testing accuracy when they should be focused on how the tests are used and whether they are accurate enough to do more good than harm in specific contexts.

The FDA was too lenient with antibody tests, which are designed to detect past infections and held out as a hope for “immunity passports.” The benefit was marginal, and a high rate of false positives could lead to harm if many people wrongly assume they are immune.

Antigen tests, on the other hand, can save lives by detecting active infections.

Experts say these tests tend to have a low rate of sensitivity — they catch only about 80 per cent of infections.

A report in Science says antigen tests find true positives between 50 per cent and 90 per cent of the time. But that’s still useful if they’re used for randomly sampling people to locate possible outbreaks. And Gehrke points out that if people are tested repeatedly over several days, a test with 80 per cent sensitivity will catch almost everyone.

Right now, catching 80 per cent of infections among an asymptomatic population is better than what we’re doing now, which is catching zero.

Bettina Fries, the head of the infectious disease division at Stony Brook University, says that testing and surveillance are critical for keeping the economy running without risking new spikes of disease. For this to work, routine testing has to be relatively easy.

People aren’t going to wait hours in line every day at a drive-through facility to endure repeated, deep nasal probes.

Gerhke says antigen tests can be geared to work with different kinds of samples, including saliva or nasal swabs that sample from a more accessible depth. Results take at most 15 minutes, with high viral loads showing up almost instantaneously.

Another simple, practical solution is the adoption of wearable devices that flag infection early. Scientists already know that our heart rates change when we get the flu. This change can be seen on a wearable device days before we come down with symptoms.

Researchers working on that technology at Stanford, UCSF and Scripps Research Institute quickly turned their attention to COVID-19, and they say such devices could pick up infections days before people show symptoms — or in people who report no symptoms.

At Stanford University, one of these researchers is Michael Snyder, who has been developing an algorithm for detecting heart rate changes and other physiological signs associated with COVID-19.

He says before the pandemic, his own wearable picked up four infections — one case of Lyme disease, confirmed by a test, two viral infections and one asymptomatic infection he said he can confirm because his blood also showed a high level of C reactive protein — a marker of a recent viral infection.

Now he’s gathered data on several thousand people during the pandemic, including 14 who eventually tested positive for COVID-19.

In 11 of the 14, the devices picked up a strong signal of infection before the person got tested, and in 9, it found infections before there were any noticeable symptoms. He says he expects the technology to catch all of the infections early, and is confident that with more tweaking, accuracy will improve.

Physician Eric Topol, who directs the Scripps Translational Research Institute, is heading part of another study of wearables.

He’s also been tracking different countries’ success in fighting the virus, and deems the U.S. the world’s worst performer so far. And yet, American scientists have been busy inventing smart ways to get out of the mess.

The purpose of the lockdowns was to buy time for hospitals and researchers, and to allow public health officials a chance to devise a more targeted strategy. The doctors and scientists have done their part; we have the technology to control the disease. Now we need an organized commitment to use it.