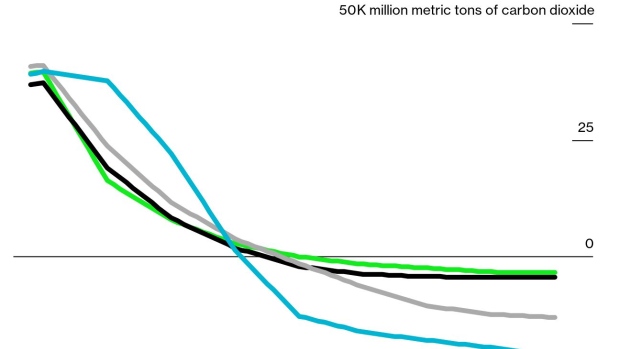 My monthly water bill is about £20 ($28). Half of it pays for the water that’s piped into my London flat; the other half covers the cost of treating the wastewater from my property.

That most unremarkable of facts about my ablutions has a climate lesson: we already pay to manage some of the waste generated by daily living.

Water isn’t the only product where this applies. In the U.K., for example, “producer responsibility regulations” are in place for items including electronics, batteries and vehicles. Manufacturers pass that clean-up cost to customers.

Why don’t we have similar laws for managing carbon-dioxide discharge? Researchers at the University of Oxford, lead by Myles Allen, argue that we should. They advocate for a “carbon take-back obligation,” or CTBO.

The idea is simple. Companies that extract fossil fuels should be responsible for ensuring the same amount of CO₂ generated from using them is buried back deep underground.

Some oil and gas companies already claim to do something similar, except that they pay for nature-based projects — such as preventing deforestation — to offset their pollution. Even if these credits work as promised, and many don’t, a tree can only store CO₂ for a few decades. Eventually, it dies and the carbon is released back into the atmosphere.

Instead, CTBO would be based on the principle that carbon removed from the geosphere should be returned to where it came from and remain there for thousands or millions of years, using carbon-capture technology. That’s the only way to meet the goals of the Paris Agreement, says Eli Mitchell-Larson, Allen’s colleague at Oxford.

Of course, this is going to be much more expensive than buying cheap carbon offsets. But the researchers argue that we can start small, with an obligation to capture and store only about 10% of emissions by the end of the decade and 50% by 2040.

They call those shares “stored fractions” that will increase slowly to reach 100% by mid-century, meeting the requirement set under the Paris Agreement to “balance between anthropogenic emissions by sources and removals by sinks of greenhouse gases.”

That’s no small feat. Currently, the world captures less than 0.1% of CO₂. That means scaling up the industry by 100 times in less than a decade. But it’s doable, especially if you start smaller, says Margriet Kuijper, an independent consultant on carbon management.

Kuijper wants the Dutch government to adopt the CTBO for natural-gas use. That’s because the Netherlands is already on its way to eliminating coal by 2030, and oil is a little more complicated to monitor at first. Any company that extracts gas from the Netherlands or imports it from outside will be responsible for ensuring that a determined stored fraction in any given year is put back underground.

If it happens, said Mitchell-Larson, “all of a sudden there will be a demand for carbon dioxide and a lot of very big companies with a lot of capital will have to buy CO₂ with the sole purpose of burying it and meet the government’s obligation.” It’s a little bit like a carbon tax but more firmly backed by science. “Carbon tax is when a polluter pays to pollute, whereas this is about making a polluter pay to clean up,” said Kuijper.

Peter Kelemen, professor of earth and environmental sciences at Columbia University, tells a story that explains why the world can afford carbon management. In 1858, London experienced what newspapers called “The Great Stink.” The city’s broken sewer system stopped working in a summer that saw unusually hot and dry weather. Or as the City Press put it: “Gentility of speech is at an end—it stinks, and whoso once inhales the stink can never forget it and can count himself lucky if he lives to remember it.”

As a result, according to Keleman’s estimates, the government spent approximately 2% of the city’s gross domestic product at the time building an advanced sewer system and, as my water bills attest, Londoners continue to pay substantial sums annually to maintain it. “Until people have the idea that throwing CO₂ in the air is like throwing poop in the street, we’re not going to spend what it costs," he said.