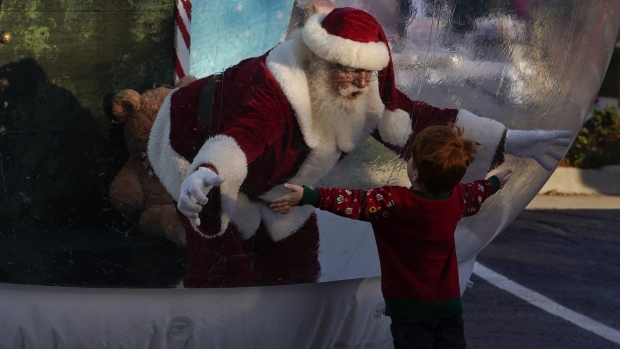 A performer dressed as Santa Claus greets a child from inside a big snow globe in Oklahoma City, Oklahoma, on Dec. 5, 2020. Photographer: Nick Oxford/Bloomberg , Bloomberg

Like other industries, demand for workers in this sector has surged as Americans try to return to pre-pandemic life. There are about 3,000 open positions across the country for Kris Kringle look-a-likes at malls, homes and corporate events, according to Mitch Allen, founder of Dallas-based talent agency HireSanta. The dearth of Santas comes as the U.S. unemployment rate fell more than forecast last month.

At the same time, the pool of available entertainers has declined by about 10% this year, Allen said. It’s an older cohort that has been hit hard by Covid-19. More than 300 Santa entertainers have died from the virus, according to data collected by Allen. Many more have been scared away by the pandemic. And just like other fields, wages are rising to lure more workers. Pay has increased as much as 15% to $10,000 for the holiday season, he said.

“We ran out of Santas,” said Allen, whose company has been struggling since October to find workers willing to don that famous red suit.

Santa has long been a tool for stores and malls to attract customers. And in the e-commerce era, with retailers desperate to draw crowds, Saint Nick has become even more important, leading to a Santa boom over the past decade. He used to only show up in department stores and malls, but more recently he’s been found at chains ranging from Walmart to Bass Pro Shops. To stand out, some malls invested more in their Santa experiences, turning them into Christmas villages that feature children’s movie franchises like “Shrek” and “Frozen.”

But as Covid ravaged the U.S. last year, Santa experiences changed. Macy’s and other retailers turned to virtual visits. The in-person attractions that remained came with social distancing measures, like putting the jolly old elf in a giant snow globe.

The recent emergence of the omicron variant threatens to revive some of the earlier pandemic protocols. Still, the Santa experience is expected to be more normal this year, said Heather Cromwell, vice president of strategy and communications at Pennsylvania Real Estate Investment Trust, which owns malls throughout the Mid-Atlantic. The company used “Santa shields” last year to separate kids from Santa. Now visitors can sit on a vaccinated Santa’s lap.

Macy’s is allowing parents to bring their kids to select locations to visit its Santaland, but with restrictions. Everyone must be masked and children will visit Santa in his office and chat with him across a desk — no lap sitting allowed.

“People are much more willing this year to go out and visit Santa,” Cromwell said.

In fact, 15% of consumers say visiting and taking photos with Santa is the holiday tradition they missed the most last year, according to researcher NPD Group.

Randyl Wagner has been a Santa for three decades. Like millions of other workers, he pivoted to remote work in 2020 and did more than 600 virtual appearances from his Detroit home. The 64-year-old is back to doing public appearances this year, but with Covid protocols in place.

“I have not done any lap sitting yet,” Wagner said.

Howard Graham, 68, worked his way up the ranks to become one of Radio City Music Hall’s two in-house Santas. However, he didn’t perform last season because he got Covid before Thanksgiving and was hospitalized. Graham decided to dress up again this year, but just for charities, while avoiding bigger events.

“I’m not wary or afraid to meet one-on-one with anybody,” Graham said. “I’m just being cautious.”