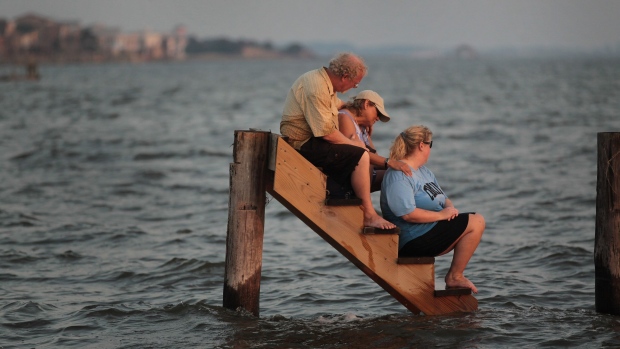 (Bloomberg Opinion) -- Even people who say they believe in climate change may be in denial — the same kind of denial that allows us to ignore our own mortality.

This tendency to turn away from disturbing facts manifests itself not in what people say but what they do. In one recent study, for example, many people in hurricane-prone regions failed to take basic precautions to protect their homes, whether or not they recognized that climate change was putting them in increased danger.

Denial of that sort might be embedded in our DNA. Some scientists think it’s the primary trait that distinguishes humans from other animals. We know we are going to die, so we develop beliefs in an afterlife, or we just don’t think about it at all. And in a similar way, we don’t dwell on the fact that human activity has changed the atmosphere, and that conditions could get very bad in the near future.

In a controversial essay published in the New Yorker last month — “What if We Stopped Pretending?” — novelist Jonathan Franzen made a connection between denial of death and climate change. “Despite the outrageous fact that I’ll soon be dead forever, I live in the present, not the future. Given a choice between an alarming abstraction (death) and the reassuring evidence of my senses (breakfast!), my mind prefers to focus on the latter.”

The planet, too, is still “basically normal,” he observed. Many of us are experiencing familiar seasonal weather patterns, even as our television screens show others in more vulnerable areas battling catastrophic floods, fires and storms.

The piece generated some outrage, especially from scientists, for expressing doubt that people will be able to reduce emissions enough to keep global temperatures from rising more than 2 degrees C — a goal set by the Intergovernmental Panel on Climate Change several years ago. Some also disagreed with Franzen’s alarming contention that warming over two degrees will trigger the collapse of civilization. If 2 degrees ends the world, there’s no point in trying to keep it from getting even warmer, but scientists generally agree that 2 degrees will be less destructive than 2.5 degrees, and both are preferable to 3 degrees.

But the essay’s value is not in anything Franzen says about climate, but what he says about the human psyche. Scientists are obligated to be precise. Artists, on the other hand, stir emotions.

And scientists, too, are applying themselves to understand the way the human psyche is contending with climate change. Something of that was revealed, for example, in that recent study on hurricane preparedness. There, a collaboration of engineers and political scientists from the University of Notre Dame used survey data from 662 respondents in North Carolina’s Hanover County — part of so-called hurricane alley.

Their findings: Those who believe climate change is making their situation more dangerous are no more likely to take action than those who doubt the scientific predictions.

Environmental engineer Tracy Kijewski-Correa, who was a co-author, said there’s a lot people can do to keep from losing their homes, but even in the most danger-prone areas, people average about a 4.8 on a preparation index that goes from 1 to 10. It makes no difference how people feel about climate change, she said, whether they vote Democratic or Republican, or whether  they believe natural disasters are partly the will of God.

People with higher incomes were just as lax as poorer people when it came to preparing existing homes, though they were somewhat more likely to buy homes with hurricane safety features. The one factor that did clearly correlate with pre-emptive action was having sustained damage from a past storm.

Author Kari Norgaard said she has seen a similar response in Norway, where she researched climate change attitudes and actions for her book, “Living in Denial.” “It’s not that people don’t care and it’s not that they don’t know, but it has to do with how we manage very disturbing information,” she said. The world reinforces the notion that everything is fine. In her research, when she asked about climate change, people expressed feelings of helplessness and fear — akin, she said, to the way people have long reacted to looming presence of nuclear weapons and human rights abuses.

Denial is embedded in the language we’ve adopted to talk about health, with doctors declaring that bad nutrition, say, is a leading “cause of mortality.” Eating better might buy some of us more time, but mortality is unavoidable — just a fact of life.

This concept of denial came up several years ago, when I interviewed scientists about the traits that distinguish humans from other animals. Arjit Varki, a professor of medicine at the University of California San Diego, said that because we alone know death is inevitable, our species has needed denial to survive. Since that time he co-authored the book “Denial: Self-Deception, False Beliefs and the Origin of the Human Mind,” which covers humanity’s ability to deny both death and climate change.

It is, of course, possible that other highly intelligent animals, such as whales, know something about their ultimate fate, and live in denial just as we do. For them, it might be beneficial. For us, with so much power to change our environment, perhaps the opposite is true.