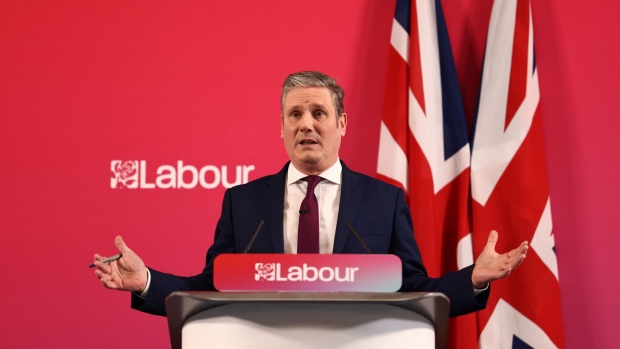 Keir Starmer, leader of the Labour Party, delivers a keynote speech on "Security, Prosperity and Respect" in Birmingham, U.K., on Tuesday, Jan. 4, 2022. The U.K.'s ruling Conservatives are 16 percentage points behind the opposition Labour Party in the “red wall” of traditionally Labour-voting constituencies in northern England the Tories flipped at the last election. Photographer: Darren Staples/Bloomberg , Bloomberg

(Bloomberg) -- British business leaders have committed to working with Labour as the opposition party tries to get industry onside ahead of the next election.

After Shadow Chancellor of the Exchequer Rachel Reeves announced that “Labour is back in business,” Amanda Blanc, CEO of Aviva, said the business community and the Labour Party “have the same motivations” of wanting to create a stable, growing economy. That’s a shift from the recent past, Blanc indicated, when the mini-budget delivered by Liz Truss’s government showed that “political decisions cannot be divorced from reality, or from business.”

At a conference attended by 350 business leaders, including bosses at SSE Plc, HSBC Holdings Plc and Microsoft UK, Labour leader Keir Starmer said his party’s engagement with the business community was “palpable and tangible”.

The conference is the latest step by Labour to repair its relationship with business after Jeremy Corbyn’s left-wing leadership alarmed some in the City.

John Allan, the chairman of Tesco Plc, said that Labour had a “forest of good policies,” and that the party “clearly” wanted to work with business.

Speaking after the event, Justin King, the former chief executive of J Sainsbury Plc and a non-executive director at Marks & Spencer Group Plc, said that Starmer was inviting a conversation with bosses. “Business only has itself to blame if it doesn’t engage because the current government has made very clear over an extended period of time that business has lost its voice in many ways,” King said.

Reeves said she hoped to encourage more businesses to list in the UK, after Paris overtook London as Europe’s biggest stock market, according to Bloomberg research. A new plan, led by Jim O’Neill, the former Goldman Sachs chief economist, to boost startups includes a recommendation to link venture capital money with fast-growing enterprises. It is hoped this will ultimately improve the fortunes of Britain’s capital markets.

“When talking to startups, one of the biggest things they say about why they go abroad, particularly in the US, is access to capital, and because that’s where your investors are, that ends up where they list as well,” Reeves said.

Reeves told reporters after her speech that Labour did not support the government’s plan to scrap the cap on bankers’ bonuses. In comments that may stir uncertainty among banks, Reeves said at a time when the government is urging pay restraint and fighting surging inflation, it was not “the right priority” to scrap the cap.

Making changes to the cap — which was introduced as part of EU legislation — is likely to take months, and could come after the next general election. Labour will set out a firm policy ahead of the election, Reeves said.