COVID-19 to create 'a big hole' in the economy: Former BoC Governor

As investors try to make sense of one of the swiftest downward spirals in market history, some of Canada’s biggest money managers are advising clients to hold their nerve.

On Thursday, the S&P/TSX Composite Index plunged 12.3 per cent in the biggest one-day percentage drop since May 1, 1940 as investors assessed the likelihood of a global recession because of the coronavirus pandemic. The loonie has weakened almost 6 per cent this year against the greenback and government bond yields have plumbed record lows.

The stock index has tumbled 30 per cent in three weeks since its Feb. 20 peak, battered by concerns on the virus and plunging oil prices. That’s about twice the 15 per cent slump in the three weeks after Lehman Brothers Holdings Inc. collapsed during the 2008 financial crisis.

Before the market opened on Thursday, Bloomberg gathered with three top investors to discuss where we go from here. Around the table were Lesley Marks, chief investment strategist at BMO Private Wealth; Rob Vanderhooft, chief investment officer of TD Asset Management, which manages $394 billion (US$286 billion); and Kevin McCreadie, CEO and CIO of AGF Management Ltd., who sets the direction for about $37.4 billion in assets.

Here’s a synopsis of the discussion.

Financial markets are experiencing extreme movements not seen since the 2008 financial crisis. But the structure of the market has changed since then and that’s a factor in the volatility, said Marks.

Exchange-traded funds are now an easier way for investors to move money quickly. “Historically, it may have taken a longer period of time to move money in and out of asset classes versus using an ETF,” she said.

ETF assets had grown to more than US$5 trillion globally this year compared with about US$700 billion when the financial crisis first started, according to Bloomberg Intelligence.

Program trading may be another reason that activity is frantic in the first and last 30 minutes of any trading day and quieter in between.

Vanderhooft at TD said a dramatic drop in liquidity is also contributing to the downturn. “Liquidity is a coward and it disappears at times of market disruptions and that’s certainly what we’re seeing right now.”

Either way the market is a different beast, the strategists said.

“They are not traditional market makers any longer,” said McCreadie. “I think in this period of volatility, we will see how the market structure has evolved and will it hold up.”

The hit to oil prices is compounding the damage from the virus pandemic in Canada, where 15 per cent of the TSX index is made up of energy stocks. The breakup of the OPEC+ alliance led to swift price war on crude, with catastrophic consequence for the oil patch. The country’s benchmark crude, Western Canadian Select, is at US$18.74 a barrel.

“If you look at the impact on the oil market, it’s very, very negative for Western Canada,” Vanderhooft said. “As bad as US$31 WTI is, US$20 WCS is a lot worse. A lot of companies that were already teetering will go under.” 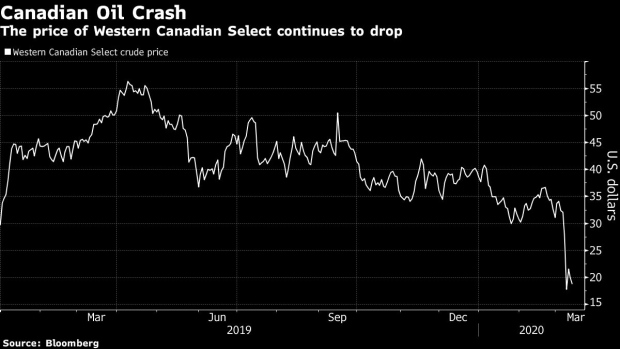 Smaller producers may have a harder time surviving the current crash in prices than during the 2014 crisis because banks are less inclined to prop them up, added McCreadie.

“This time around a lot of these smaller players aren’t going to make it,” he said. “I think you’re going to be dealing with bankruptcies.”

The increased focus on climate change and sustainability may be factoring into banks’ thinking more now, said Marks. “You already had that major headwind without the latest crisis, without a price war, without the situation between the Saudis and the Russians. We think this will just fuel the fire.”

Vanderhooft said that his firm has moved to a “more negative position” on the Canadian dollar as a result of the oil-price hit. The loonie hit fresh four-year lows at one point on Thursday.

All three strategists say the markets will come back. McCreadie and Vanderhooft see the current turmoil as different than 2008.

“2008 was a true credit crunch, people didn’t trust each other, banks stopped lending, there was no repo. The world stopped,” McCreadie said, adding there’s unlikely to be “system failure” now.

As coronavirus cases start to ebb, as they have in China, that will likely be when the market begins to turn back up, especially if governments get their act together with fiscal stimulus to aid the economy.

“We’re not playing this as a multi-year bear market,” he said, though odds of a recession in North America have clearly risen. “I think it could be the pause that resets the cycle.”

Marks said BMO hasn’t seen any substantial fear when it comes to asset outflows, with much of the money shifting to bonds from equities. “In conversations with clients, we haven’t seen that sense, that pervasive sense of panicking, that ‘Get me out of the market’ across the board.’”

“We will get through this event,” McCreadie said. “We always do.”

“You talk about fully balanced portfolios, that’s where clients need to be,” said Vanderhooft. “At times of stress like this, you kind of figure out why that’s the case.”

McCreadie’s team at AGF will be looking at paring back investments that have generated double-digit returns and add some of its cash back into markets over the next few weeks.

Marks said she is standing pat after BMO Private Wealth’s Investment Counsel Business reduced its equity exposure in November. While stocks have become cheaper, the lack of visibility makes it “hard to have conviction to step in,” she said.