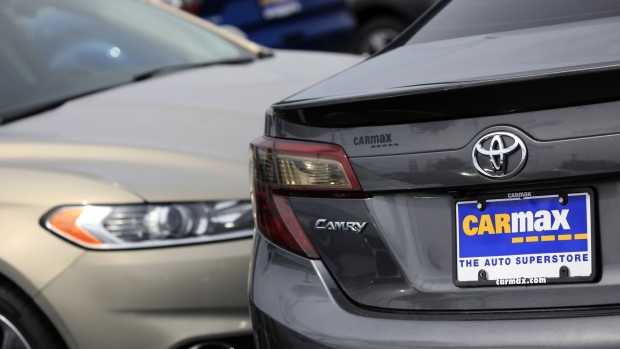 Vehicles bound for shipment parked at a port in Yokohama. , Bloomberg

Parts shortages have led automakers around the world to cut production and car buyers are unsure when they’ll be able to get their hands on new vehicles, USS President Dai Seta said in an interview. That’s fueling more interest in pre-owned automobiles, he said.

On top of that, with the yen recently hitting 24-year lows, Seta says he’s hearing from buyers who export overseas that customers are increasingly clamoring for what they see as “major” yen-denominated discounts. USS handles around 40% of inter-dealer used-car auction transactions in Japan.

With new versions of popular models strapped with years-long wait times, average used-car transaction prices are being driven up at the company’s 19 auction sites across Japan.

The average bid price at USS-run auctions has increased year-on-year for 12 consecutive months through May, 2022. In February, that figure reached a record high of just over 1 million yen ($7,340).

Competition for vehicles in the low-price range of around 50,000 yen is also rising, according to Seta. Given the current industry parts shortages, cars are being viewed as “clusters of resources,” he said. Across the board, “inquiries for used cars will continue to be strong.”

Another part of the rising used-car price puzzle involves Russia — the top destination for pre-owned Japanese vehicles. While the import and sale of new automobiles in Russia been halted due to sanctions, Japanese law allows for the export of vehicles under the price of 6 million yen. “Russian demand for used cars may become stronger,” Seta said.

Seta said he’s also seeing growing interest in vintage Japanese cars, from buyers in markets such as the US.

All of this has led to a windfall for Aichi-based USS. The company posted a record operating profit for the fiscal year ended March. For the current year, the company forecast its profit will rise further to 43.1 billion yen, up 3.7%.

USS shares have also climbed over the past year. Despite a recent dip, USS has a market capitalization of almost 732 billion yen, putting it on par with the valuations of automakers Mazda Motor Corp and Mitsubishi Motors Corp.

As long as vehicle supply shortages continue, used-car prices are likely to set records, SMBC Nikko Securities Inc. analyst Ryozo Minagawa wrote in a report earlier this month. A risk going forward will be if the dearth of new cars begins to ripple into the used-car market as well, according to Minagawa.