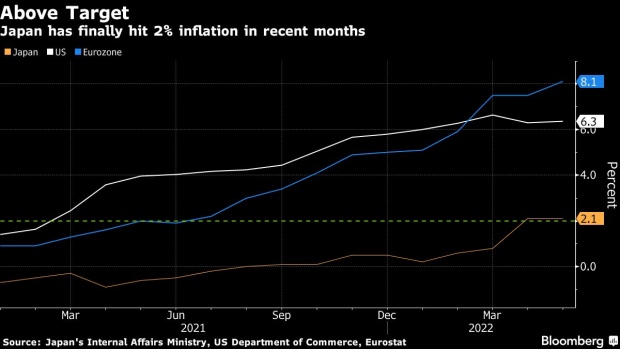 A customer prepares Japanese 1,000 yen banknotes while making a purchase an Akidai YK supermarket in Tokyo, Japan, on Monday, June 27, 2022. Japan's key inflation gauge stayed above the Bank of Japan's target level of 2%, a result that will likely keep speculation alive over possible policy adjustments at the central bank. Photographer: Kiyoshi Ota/Bloomberg , Bloomberg

(Bloomberg) -- The recent sharp weakening of the yen has only had a limited impact on Japan’s key price gauge, according to a researcher of currencies and prices.

Since the yen began its precipitous fall against the dollar in March, it has only pushed up core inflation by about 0.4 percentage point, according to Yuri Sasaki, an economics professor at Meiji Gakuin University in Tokyo.

The conclusions of her research back up the Bank of Japan’s stance that currency moves don’t sway inflation that much and shouldn’t influence the direction of central bank policy.

So far Governor Haruhiko Kuroda has maintained his stance that Japan’s economy still needs support from ultra-low rates, and policy should never target foreign exchange rates. He remains a stark outlier among his peers as central banks around the world rush to hike rates to tame inflation.

“What’s more important than looking at the weaker yen is figuring out the effects from supply-side shocks,” said Sasaki in an interview last week. The influence of the weaker yen on inflation is “really very small,” she said.

The yen weakening 1% against the greenback pushes up the core consumer price index by 0.02 percentage point, according to Sasaki’s calculations.

Still, with national core-CPI remaining above the BOJ’s 2% target for two months running, speculation over normalization from the central bank is likely to continue.

Sasaki added that unlike past periods of oil price booms and yen weakness, the current bout of inflation is starting to show a more sustained impact from supply-side shocks and commodity price increases. There will be more moves toward raising wages as the economy recovers, she said.

Ensuring domestic demand and consumer spending don’t peter out over the next couple of years is important, she added.

“We’re seeing movements that go against the belief that prices don’t budge,” said Sasaki. “I don’t see a reason why only Japan will see inflation head back to zero.”