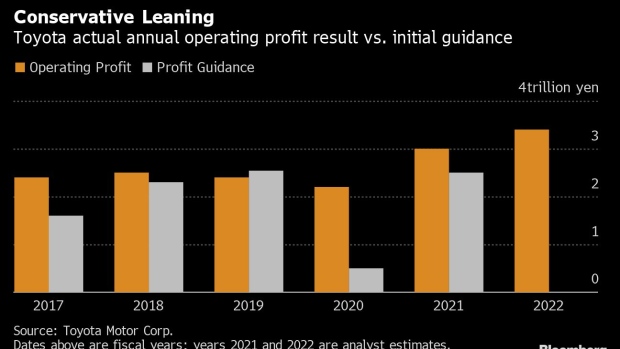 (Bloomberg) -- Strong sales and the yen’s historic fall are projected to boost Toyota Motor Corp.’s profit for the recent fiscal year, with the focus shifting to whether the world’s biggest carmaker can sustain growth in the face of economic headwinds and an uncertain supply outlook.

Analysts, on average, estimate that Toyota will show an operating profit of 3 trillion yen ($23 billion) for the period ended March when it reports results Wednesday. That would top the Japanese automaker’s most recent forecast for 2.8 trillion yen. Analysts are predicting a 3.4 trillion yen profit for the current year, which began April 1.

Toyota’s sales have been robust in recent months. While January-March unit sales dipped 4.2% from record highs seen during the same quarter a year earlier, it marked a recovery from the prior quarter’s 12% decline. Those bolstered figures led the carmaker to post its second-highest unit sales figure ever for the recently ended fiscal year.

On top of strong sales, a weakened yen — which recently hit 20-year lows — is inflating the value of profits that Toyota earns overseas. Currency moves are helping Toyota and other Japanese automakers beat back numerous other headwinds, according to Bloomberg Intelligence.

The question is how long such conditions will last.

Toyota, along with other global carmakers, has faced a myriad of disruptions, on top of the persistent shortage of semiconductors for automobiles. The automaker is facing higher material costs related in part to the Russia-Ukraine war and continuing Covid-19 outbreaks in China, which have recently seen the automaker’s plant in Jilin Province shuttered for more than a month.

Jefferies Financial Group Inc. downgraded Toyota’s rating to hold last month, citing “too bullish” expectations with regard to auto industry earnings for the fiscal year through March 2023. The aggravation of cost inflation due to the Ukraine crisis and a potential slowdown in global economic growth are likely to cause “considerable damage” to the entire auto sector, analyst Takaki Nakanishi wrote.

Other analysts maintain that the weakened yen will continue to offset other negative factors, as least for the upcoming half year or so. Though Toyota tends to issue conservative outlooks, the automaker’s forecast for the current fiscal year ending March 2023 will provide insight into its assessment of countervailing factors.

Toyota shares rose more than 30% over the fiscal year ended March and have been little changed over the past month.